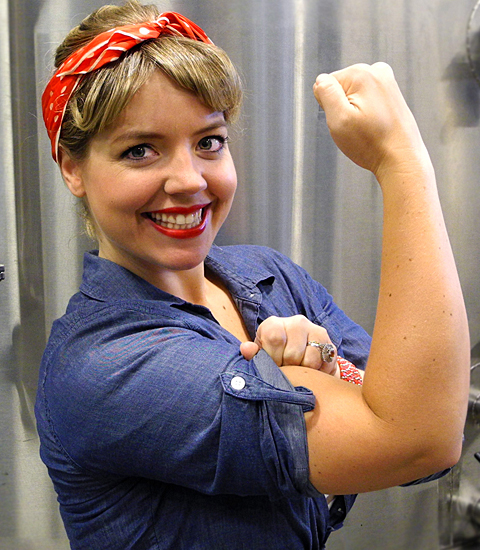 Hood River, Oregon –   Full Sail Brewing will release a new beer in their Brewer’s Share Experimental line up: “Duffy’s Counterpunch,” an Imperial Cascadian Dark Ale crafted by Marketing Coordinator Stephanie Duffy. This ICDA is rich and complex, with woodsy evergreen aromas complemented by notes of coffee and dark chocolate from roasted malts. The mouthfeel is full-bodied and warming, and the ample malt body (with help from Munich and a range of Caramel and Carafa dark malts) supports the assertive roast and hop character. Nugget, Crystal, and Brewer’s Gold hops provide a slightly fruity, tangerine note and a crisp, hoppy finish. ABV 7.5% IBU 82

“My beer defies the traditional expectations of a “girl’s beer.” Like many women, I love my beer and I appreciate a broad cross-section of craft brews. I’m lucky to live and work in a beautiful place like Oregon, where craft beers are such a vital part of our culture. Though the beer industry is still very male-dominated (as are so many other industries), I thought it was especially appropriate to brew a bold, strong beer in honor of all the bold, strong women who shirk stereotypes and avoid being pigeonholed. We’re in no need of pandering! Our tastes are as diverse as anyone else’s. Duffy’s Counterpunch is a richly nuanced counterargument—in beverage form,” said Duffy.

She adds that, “Strong women have always inspired me, and I’m fortunate to have a CEO and Founder like Irene Firmat leading us employee-owners at Full Sail. She’s been in the game with the boys since 1987 and has come to the forefront as a savvy businesswoman who creates a company that truly loves and respects the culture of beer. You couldn’t ask for a better female role model than that.”

Full Sail has two “Meet the Brewer and the Beer” events scheduled. The first event is at Full Sail’s Brew Pub in Hood River, Oregon on Tuesday, October 29th from 5:00 to 6:00 PM.  The second release is November 1st at 6:00 PM at Portland’s historic Hollywood Theatre as part of their monthly Brew Masterpiece Theater series that invites brew masters to craft small batch unique beers inspired by the films they love. Stephanie was inspired by the classic 1991 Ridley Scott film Thelma & Louise for her beer. “Even 22 years later, it’s still too rare to find a mainstream film with two strong women in starring roles. The movie is controversial and has incited many debates regarding feminism, prejudice, patriarchal control, abuse, and sisterhood,” she said.  The “Meet the Brewer and the Beer” reception is from 6:00 to 6:45 PM followed by a one-night-only showing of Thelma & Louise at 7:00 PM.  Tickets are $8.00.

With each Brewer’s Share series beer, Full Sail picks a local nonprofit to receive a portion of the proceeds from the sale of the beer. Stephanie has chosen to support Bitch Media, so every keg of Stephanie’s beer benefits this nonprofit feminist media organization, best known for publishing the magazine Bitch: Feminist Response to Pop Culture. Bitch Media’s mission is to provide and encourage an engaged, thoughtful feminist response to mainstream media and popular culture.

“My hope is this beer will inspire further conversations about women’s rights, feminism, and equality, because those are incredibly important and pertinent topics for all of us. What better place to discuss the philosophies of our culture and world than in a public house over a pint? That’s why I chose to support Bitch. They promote healthy, informed discussions about feminism in our culture. Not only that, they’re based out of Portland and I find their insight to be of the highest value,” added Duffy.

About Full Sail Brewing Company:
The independent and employee-owned Full Sail Brewery is perched on a bluff in Hood River, Oregon, overlooking the most epic wind and kite surfing spot in the world. At this very moment our specialists in the liquid refreshment arts are crafting barley and hops into your next beer. Among the company’s most popular brews are Full Sail Amber, IPA, Limited Lager Series, Pub Ale Series, Session Premium, Session Black, and Session Fest lagers. Founded in 1987, the Full Sail crew has been fermenting godlike nectar for 26 years. Committed to brewing great beer and sustainable practices, their award winning brews are now available in 31 states. The Full Sail Tasting Room and Pub is open seven days a week. Swing by for a pint, grab a bite, tour the brewery, or just soak up the view.