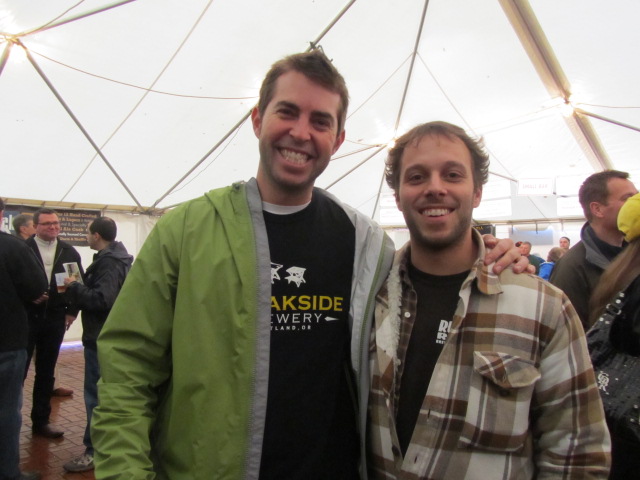 January proved to be a record-breaking month for Northeast Portland’s Breakside Brewery, where sales of the pub’s housemade beers skyrocketed, and eager customers literally drank the cellar dry. At month’s end, brewer Ben Edmunds finds himself playing catch up to get the popular IPA, hoppy amber, and Aztec ale back on tap. To remedy the situation, Breakside purchased two new fermentors, effectively doubling their total production capacity. Despite the demands of doubled production, Breakside continues to release experimental beers each Wednesday afternoon. As always, these are small batch (one keg only!) brews; they are tapped at 3 PM each week; when the keg is finished, the beer is gone, and there is no guarantee that the beer will make another appearance. The January releases—a brunch pale ale, rye common, and sake-inspired beer with cedar and ginger—were often gone in only a matter of hours. Here is the schedule of upcoming releases:

February 9 Sticke Alt Alt is one of our favorite beer styles. It’s also one of the most misunderstood. In addition to our regular strength alt that will be on tap this February, we’ve brewed a small batch of ‘sticke’ or ‘secret,’ strong alt for our most loyal customers.

February 16 Wheat Gruit In the spirit of our brunch pale ale comes this amber wheat, which is dedicated to our friends who relish the chance to try a completely hopless beer.

February 23 Castagno Selvatico The most experimental beer we’ve made yet…so much so that we’re not even sure it will be ready for this Wednesday, but if all goes to plan we will release our Italian-inspired brown ale brewed with chestnuts and fermented with a wild Brettanomyces yeast strain.

March 2 Savory Wheat Stout March is a great stout-drinking month: a pint of dark brew helps ease the way from winter to spring. We’re experimenting with a mix of savory nuts and spices to create an osmazome-forward brew that remains balanced with classic stout roast and chocolat notes and a wheaten body.

Outside of the experimental series, Breakside currently has four house beers on tap: a witbier, dry stout, double IPA, and Belgian royal (ie ‘imperial’) brown. Joining these beers soon will be a Dusseldorf-style altbier, as well as the year-round beers that have been depleted. Breakside is also excited to announce the start of a barrel-aging program: the pub has recently acquired gin and whiskey barrels from Sheridan, Oregon’s Ransom Wine and Spirits. The barrels will be filled soon, and the brewery hopes to release the first of its barrel-aged offerings at this year’s Portland Cheers to Belgian Beers Festival.