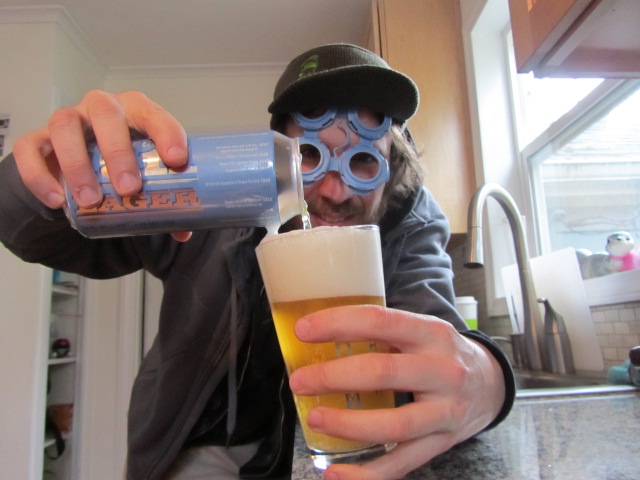 Another spectacular time to be alive and celebrating craft beer in Portland, Oregon. Spring is right around the corner and it looks like much of the colder and drearier days are behind us. Either way, we can smile knowing that Fort George’s 1811 Lager is now available in 16-ounce cans. We picked up a few 4-packs for the weekend and were thoroughly impressed with the quality and drinkability of this perfect session brew celebrating Astoria, Oregon’s bicentennial. Fort George also released their Vortex IPA in cans, too. The brewery has enlisted the help of Maletis Distribution to get their product out to the masses. Currently the cans are available in Clatsop County and around Portland. 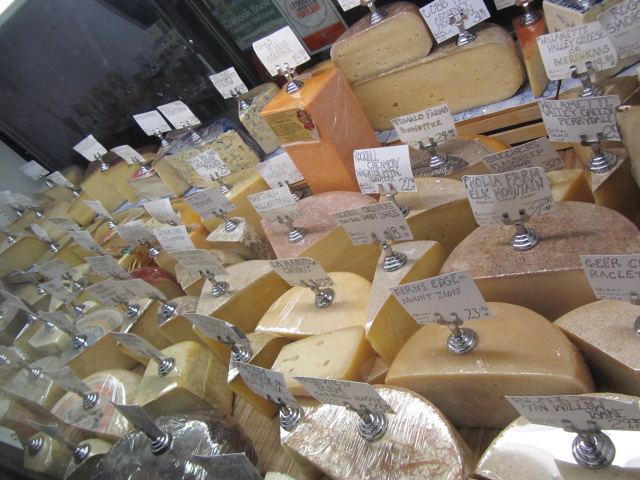 Last week we found ourselves sailing the seas of cheese at Steve’s Cheese Bar, a wonderful little spot for a myriad of cheeses and fascinating libations to pair with them. Last Wednesday the guys from Upright Brewing were on hand to spin some records (surprise: lots of Zappa). A highlight was the Safe as Milk IPA, a Brit-esque rendition of the style that proved to be rather sessionable. We also got our hands on a terrific bottle of Cantillon Lambic from Steve’s cooler. 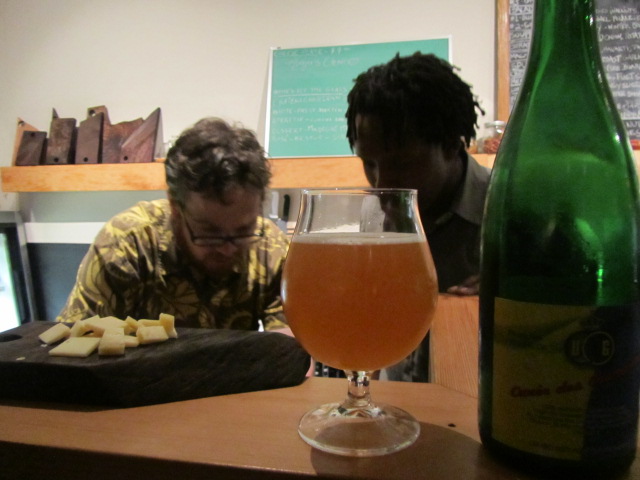 After our time at the Cheese Bar, we headed over to Bailey’s Taproom to say farewell to our friend Jason Wallace of the Portland Beer and Music Blog. Jason is headed to Texas (God save him…well, at least he’ll be in Austin). He’ll still be chiming in on his blog, but has passed the torch over to Nicole Kasten. Looks like she’s already off to a great start. 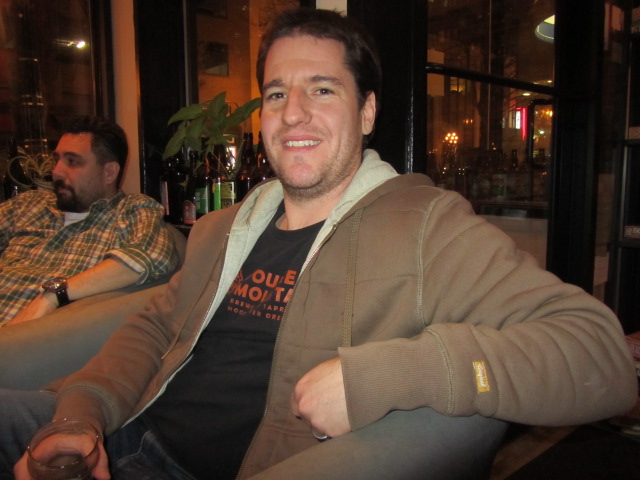 While at Bailey’s we admired their sleek new bottled beer cabinet. Just another reason to love this amazing pub! 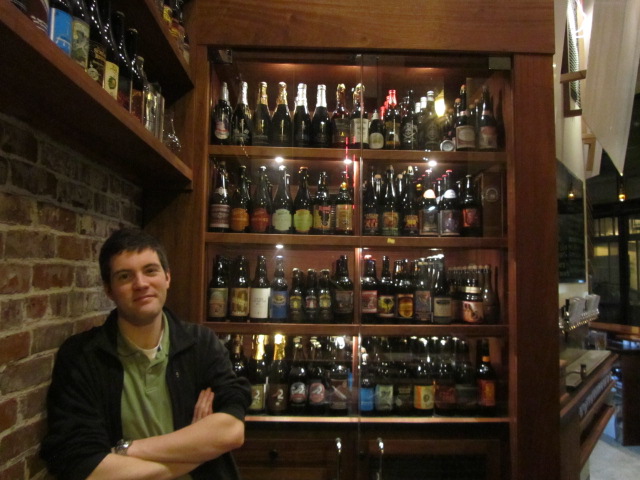 After helping to bottle some of the new batch of Five at Upright Brewing on Thursday, we landed at Belmont Station where Alex Ganum sampled folks in the bottleshop side on his brewery’s mainstay beers as well as their Oyster Stout. On the Bier Cafe side of things, Belmont Station tapped the remaining few gallons of their Smoked Redwood Lager (for just $3 per honest pint) and their phenomenally tart and complex Special Herbs aged in gin barrels. Delicious! 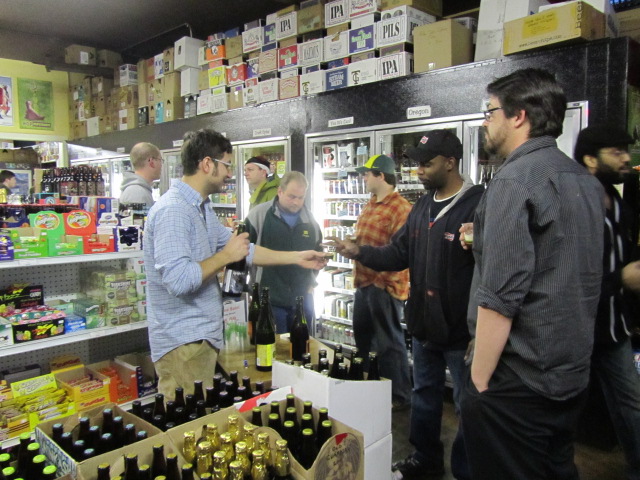 Also on Thursday Coalition Brewing released their latest Coalator release concocted by Ezra Johnson-Greenough and Ritch Marvin of the New School Beer Blog. Needless to say, the small batch citrus and pepper beer was gone in a shake of a lamb’s tail. We still enjoyed catching up with Coalition co-founder Elan Walsky who joined us for pints of his brewery’s delicious Wu C.R.E.A.M Ale. 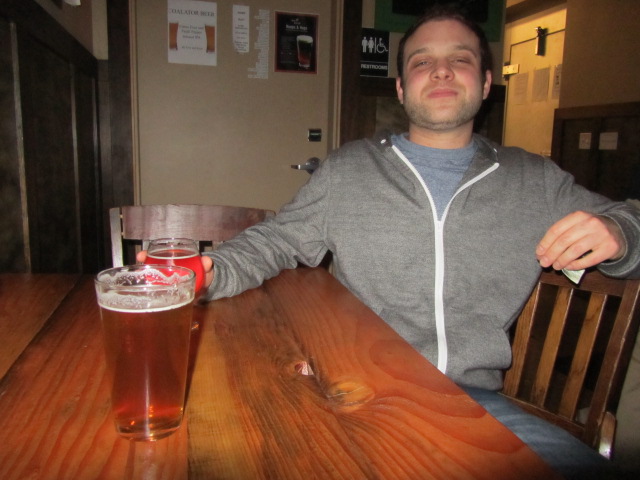 The week and weekend also involved a lot of quaffing at Saraveza. Here, we always run into the friendly staff and lots of other beer enthusiasts and friends. One of the coolest parts of the weekend was running into Flat Tail Brewing company owner Ian Duncan and head brewer/yeast whisperer Dave Marliave while enjoying Cascade Saison as Saraveza (which by the way is one of the best brews of late, too). Ian and Dave sampled us on four different beers including a spicy wit, a sessionable Kolsch, a barrel-aged stout, and a damiana-infused Imperial IPA. All of these beers were outstanding and we’re stoked to try more from Flat Tail soon. Look for these guys at Blitz Bar for our BrewPubliCrawl on March 19, too. 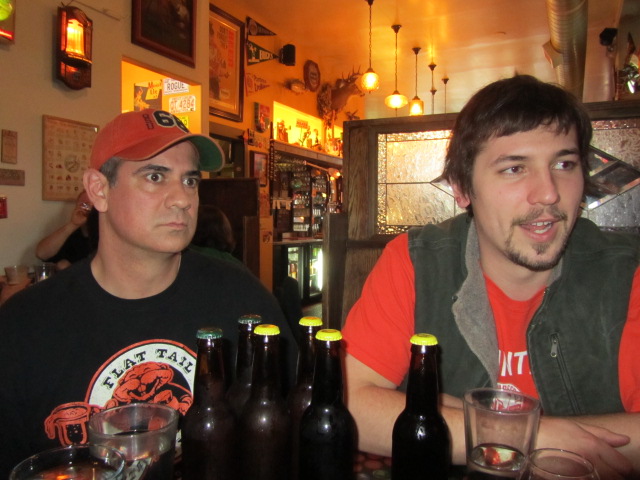 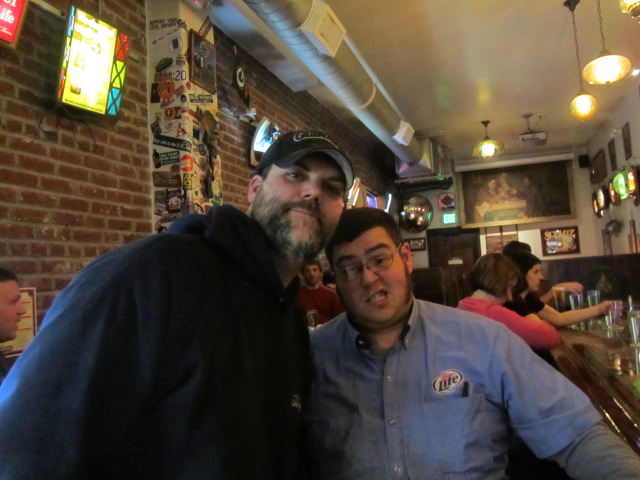 The weekend involved a lot of hoppy beerthdays. Friday we celebrated brewer Sean “Seany Wonton” White‘s birthday at his house in Northeast Portland. For the event Sean celebrated with a keg of Cascade Saison (there it is again!), Alameda Black Bear XX Stout, and two of Sean’s homebrews: Wontonomo Bay IPA and a lovely rauch (smoked) lager. 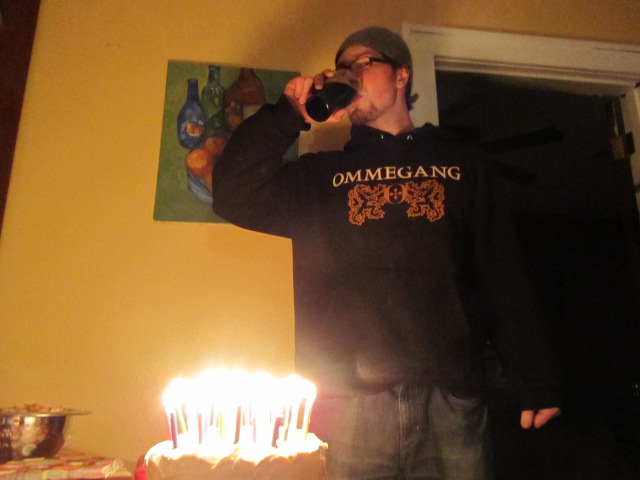 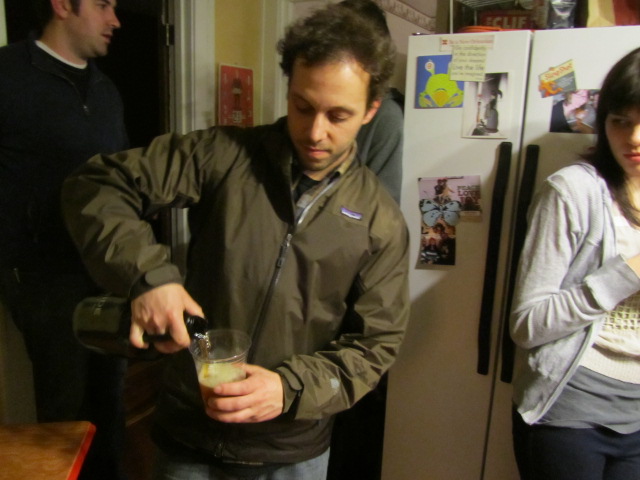 Also celebrating a hoppy beerthday over the weekend was Brewpublic’s Matthew “Toolman” DiTullo. A group of BeerAdvocates and friends surprised the birthday boy at his favorite brewpub, Hair of the Dog, on Saturday. Here, the latest batch of Cherry Adam poured as well as Blue Dot, Little Dog, and a handful of other house beers. 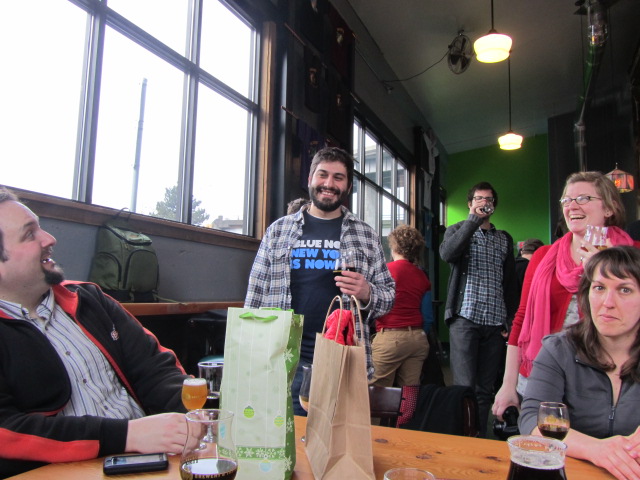 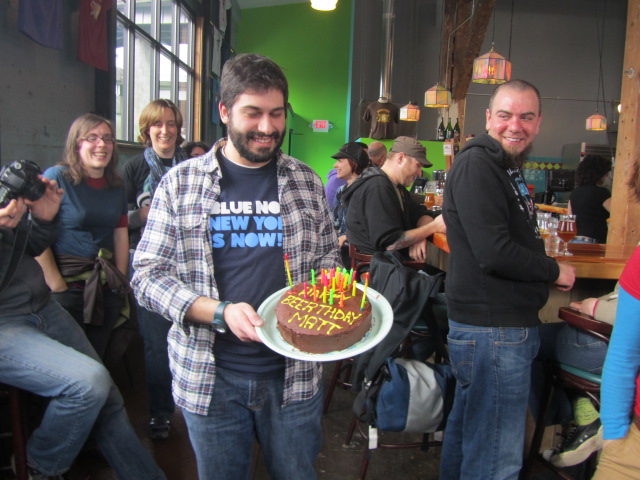 During the weekend we also found ourselves at a few of Portland’s finest bottle shops hunting down more great beer. On  Friday we hung out at Bridgetown Beerhouse owner Mike Waite. Mike told us that his Mississippi neighborhood business anticipates added taps in the back of the shop to enhance the customer experience. Can’t wait! 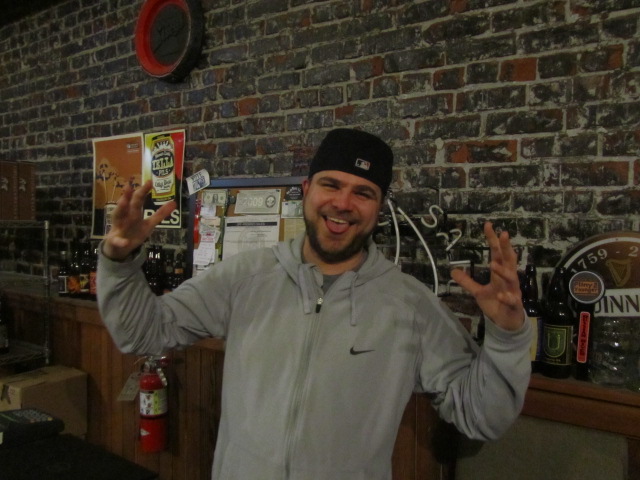 We also landed at Bottles in the Beaumont Neighborhood. Here, beertender and barbecue handler Shawn Meyer showed us a number of new releases and sampled us on a variety of brews on tap including Heater Allen Pils, Cascade Black Sheep Stout, Lagunitas Infusion V, and Stone Double Bastard. Of course, we had to scoop up more cans of Fort George 1811 Lager as well as some  Full Sail LTD 04 and 05. 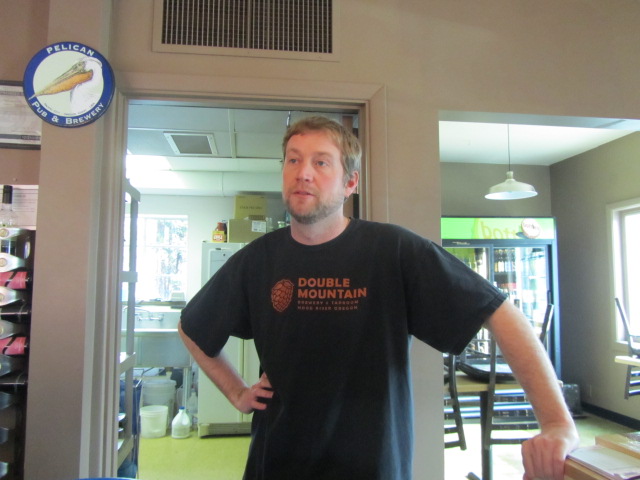 As mentioned, it was a colossal weekend beerwise. We hit up Cascade Brewing Barrel House to snag some of the last remaining bottles of The Vine and the 2007 Kriek. On tap we enjoyed a glass of the Blauw Van Der Jon Berry, a spectacular looking and tasting blueberry sour wheat ale. Bartender Phil “Biscuit” Timperman, one of the best in the biz, also introduced us to Cascade’s newest IPA, an amber-bodied hoppy brew known as Karma Citra that made use of gratuitous amounts of its namesake varietal. 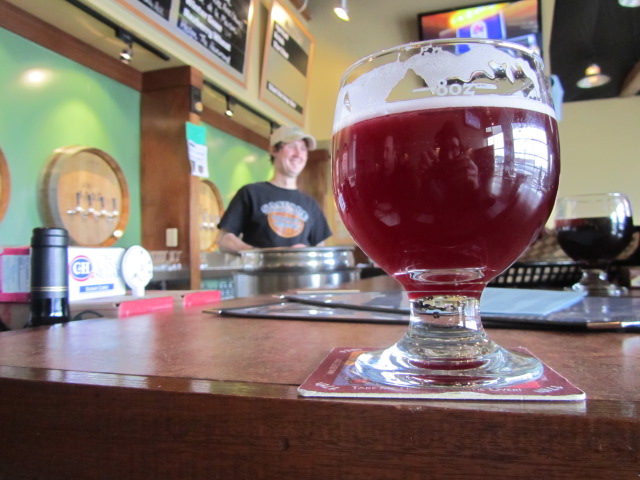 After Cascade we landed back at Upright Brewing where Ezra “Samurai Artist” Johnson-Greenough (say that three times fast) was pouring beers in the taproom. Ezra sampled us on new brews such as Coffee Stout, Oatmeal Stout, and Special Herbs from a bottle. Cascade manager Cody Bottorff who joined us, shared a sample bottle of the aforementioned ’07 Cascade Kriek which, had held up phenomenally. Unfortunately there was no remaining Ben Gosler, a special rendition of Upright Gose brewed with American wheat ale yeast and dedicated to Widmer brewer Ben Dobler. Alex and Gerritt, if you are reading this, please make more! 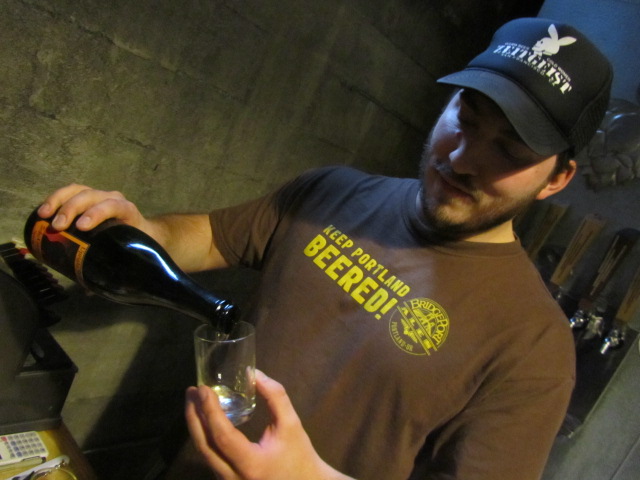 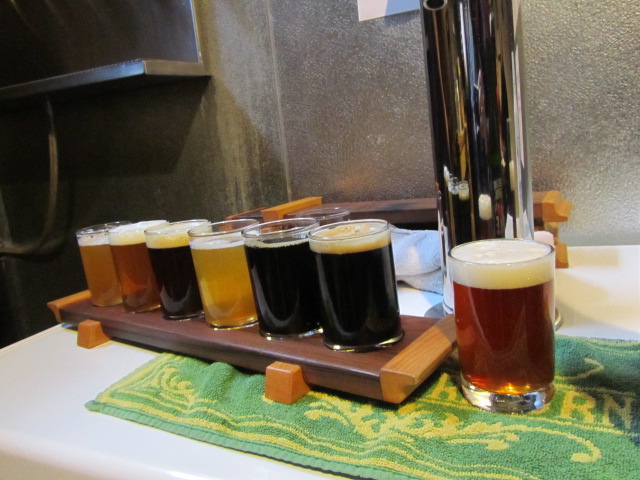 Speaking of birthdays, Sunday was also Steve Cheseborough’s birthday. Steve is a fixture at Upright who is known for his brand of blues and hokum songs often performed at Upright during taproom hours. Steve’s musical vibe fits perfectly with the ambiance at Upright Brewing. Cheers!

The weekend ended alas at Saraveza where we returned to visit Northwest Brewing News people’s choice bartender of the year Tyler “The Elder” Vickers who was revving up a Russian River tasting. 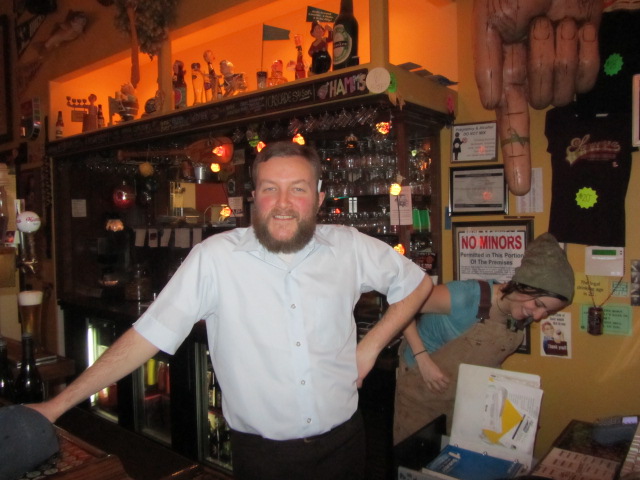 Downstairs, former bartender of the year Jonathan “the Younger” Carmean and Ryan “Ranye Midwest” Pederson were handing out beatdowns at ping pong. 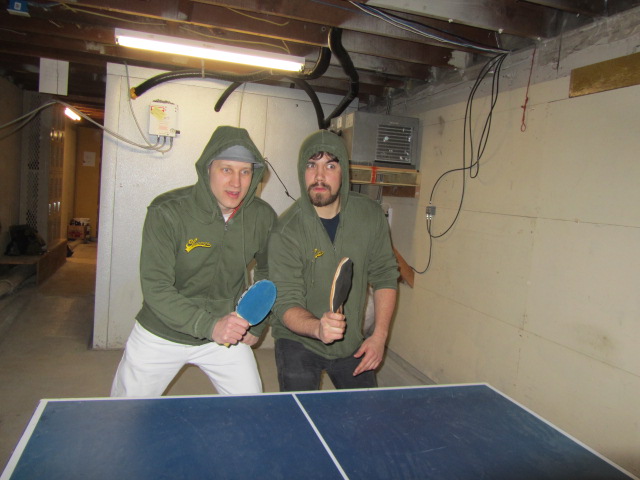 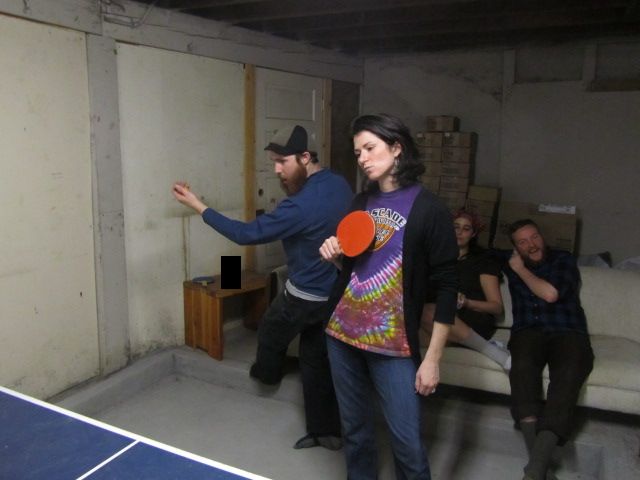