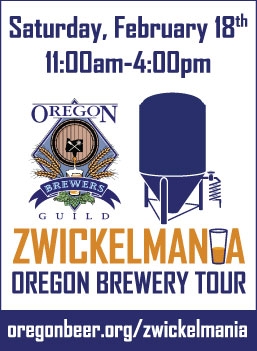 Holy hot liquor tank, Batman! This year’s Zwickelmania taking place at brewhouses throughout Oregon is going to be bigger and better than ever. The Oregon Brewers Guild has been working hard in conjunction with craft brewers statewide to facilitate one hell of an array of tours and destinations. From Portland to Ashland, from Eastern Oregon to the Columbia Gorge to the Oregon Coast, you’re strongly advised to take advantage of this unique and fun opportunity. Here’s the lowdown from the Guild:

2012 President’s Day weekend, dozens of Oregon breweries and brewpubs will open their doors to visitors for the state’s 4th annual Zwickelmania. Zwickelmania, hosted by the Oregon Brewers Guild (OBG), is a free statewide event that offers visitors a chance to tour Oregon breweries, meet the brewers and sample their favorite beers. When: Saturday, February 18th, 2012 from 11-4 pm What: Oregon Brewers Guild Brewery Open House.

Organized by the 7 Regions of Oregon 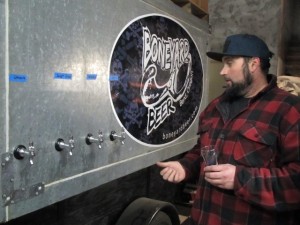 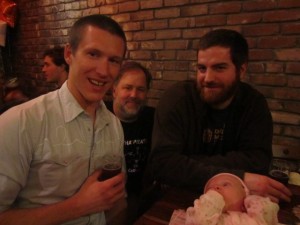 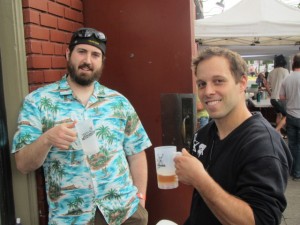 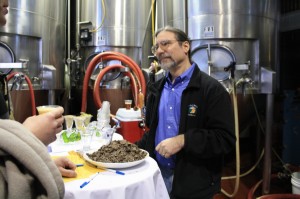 Deschutes Brewery-Portland Pub 210 NW 11th Ave Portland 503-296-4906 11-4pm Only day all year we do brewery tours in Portland! Special menu & brewers onsite! Space will be extremely limited for brewery tours.
F.O.T.M. Brewing 3443 NE. 57th Ave. Portland, OR 97213 503.894.8973 11-4pm
Full Sail at Riverplace 0307 SW Montgomery Portland 11-4pm 503-222-5343 Be sure to swing by Full Sail at Riverplace, take a tour and sample our a new Brewer’s Share beer, Dan’s Satin Nitro Stout paired with chocolate. You’ll even get to take home a complementary pint glass. (while they last) Guided Brewery Tours at 11, 12, 1, 2, 3 and 4PM
Gigantic Brewing 5224 SE 26th Ave Portland 503-208-3416 11-4pm Gigantic Brewery Tours, Loud Music +we will be pouring tastes of 2 of our collabo beers: Schwarzerfreude – brewed with Pelican Pub and Brewery and Collabo Wabo – brewed with Oakshire Brewing.
Green Dragon 928 SE 9th Ave Portland 503-517-0660 11-4pm Green Dragon will open early at 10 AM for a breakfast/brunch which will cost $10 – please to call to make a reservation if you can. The SE shuttle bus route will start at Green Dragon and the Buckman Village Brewery will be giving hourly tours at the Green Dragon and the Green Dragon brewery will have a zwickle/keller pilsner on tap
Hair of the Dog Brewing Co. 61 SE Yamhill St Portland 503-232-6585 11-4pm Brewery will be open and pouring samples of beer in the back. 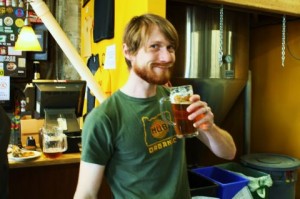 Hopworks Urban Brewery 2944 SE Powell Blvd Portland 503-232-4677 11-4pm We will be giving tours every 20 minutes! We will giving away a “Secret prize!”
Laurelwood Public House and Brewery 5115 NE Sandy Blvd Portland 503-282-0622 11-4pm Brewers will be doing tours and sampling people on our beers as well as special beers with different and new hop varieties to try. We will have cupcakes and chocolates.
Lompoc Brewing Co. – 5th Quadrant 3901-B N Williams Portland 503-288-3996 11-4pm Will be open and have brewers present. Sidebar will also be open with some appietizers.
Lompoc Brewing – New Old Lompoc Brewery 1616 NW 23rd Portland, OR 97210 503-225-1855 11-4pm Will be open and have brewers present to sample new beers and sample beers from the beer vault Lucky Labrador Beer Hall 1945 NW Quimby Portland 503-517-4352 11-4pm Tour our brewery and get a free taster of barley wine
Lucky Labrador Brewpub 915 SE Hawthorne Blvd Portland 503-236-3555 11-4 Tour our brewery and get a free taster of barley wine
Max’s Fanno Creek Brewpub 12562 SW Main St Tigard, OR 97223-6195 (503) 624-9400 11-4 (503) 624-9400
McMenamins Crystal Brewery 1332 W. Burnside St. 2nd Floor Portland 503-225-0047 11-4pm Beer tasting and light appetizers. Brewers on site to talk and to see/tour the brewery. Featured beers Obamanator Doppelbock and Scottish Rite 70 Shilling Ale
MacTarnahan’s Brewing Co. Mac Tarnahan’s Taproom 2730 NW 31st Ave Portland 503-228-5269 12-4pm Join the brewers from Pyramid and MacTarnahan’s on a tour throughout the brewery, every hour on the hour from noon – 4pm. Complementary samples of specialty beers from both Pyramid and MacTarnahan’s including specially blended barrel aged beers. The Taproom will be serving up delicious beer-inspired menu items all day. Please note: tour sizes are limited to 20 people each and are first come, first serve. 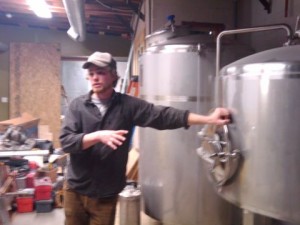 Migration Brewing 2828 NE Glisan St Portland 503-206-5221 11-4 We will be celebrating our 2 year anniversary that same day. Here is what we have planned thus far for the 18th: -Live bands throughout the day, -We will be releasing a limited run of 22oz. bottles. -We will be releasing our Double IPA “Deuce” which will come in at 95IBU’s and sit around 8.8%ABV-We will also be releasing our Coffee IPA, which holds the color of an IPA with an 1/8 a cup of cold press coffee + we will be providing tours of our brewery with samples off the zwickle. Natian Brewery Natian is going to participate in a unique way, since we can’t do a tour at our facility on that day, we have teamed up with EastBurn. Natalia and Ian will be at EastBurn pouring Natian beer and doing a meet the brewer type deal. All you Zwickelheads feel free to stop into while you’re out & about or after Zwickelmania ends at 4pm. We’ll be pouring beer at EastBurn, 1800 E Burnside from 3-5pm.
Occidental Brewing Company 6635 N Baltimore Ave Portland OR 97203 503-719-7102 11-4pm we’ll have tastings, tours, meet the brewers, and cornhole
Philadelphia’s Steaks & Hoagies 6410 SE Milwaukie Ave Portland 503-239-8544 11-4pm We are doing tours, tastings and meet the brewer.
Portland U-Brew & Pub 6237 SE Milwaukie Ave. Portland, OR 97202 (503) 943-2727 11-4pm We’ll just be brewing beer all day like normal, and giving tours. 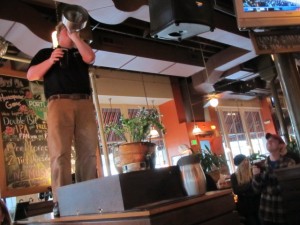 Widmer Brothers Brewing Co. 924 N. Russell St Portland 11-4pm 503-281-2437 11-4pm Join us on February 18th for free Brewery tours from the Brothers and other brewers, sample a variety of Widmer Brothers beers, including beers that you can only enjoy at the Brewery and visit multiple tasting stations with recommended food and beer pairings. All guests will receive a complimentary Widmer Brothers tasting glass that they can use for samples throughout the tour. The Widmer Brothers Gasthaus Pub and retail shop will be open regular business hours as well.

Download or view the PDF of the SE Shuttle Bus Map

Download or view the shuttle bus route for SW/NW PDX

Download or view the PDF of the N/NE PDX shuttle bus route. 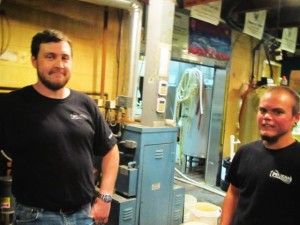 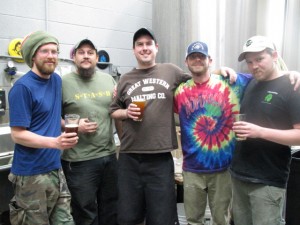 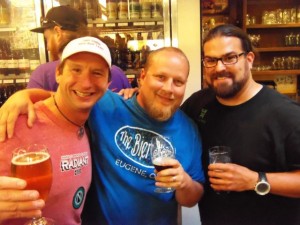 Download or view the PDF for the Eugene shuttle bus here