Blitz Sports Pub in the Ladd neighborhood of Portland has announced that they have done a major overhaul on their draft system as well as the beers that will be featured. This should be great news for craft beer enthusiasts of Southeast who are already graced with some fantastic neighborhood pubs. 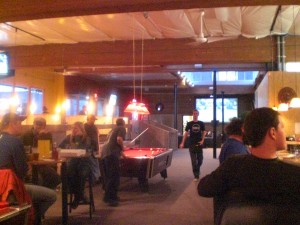 According to Madden Group/Blitz’s director of operations, Tim Becker, the redesign adds six more taps for a total of 26 draft beers  The enhanced business model focuses on the mantra “All Craft, no crap” as Blitz will now only feature one domestic macrobrew for the “light” beer drinkers. Becker says the popular Southeast sports bar, known for their shuffleboard,darts, billiards, ping pong, and all the big games on multiple big screens, has also added a new state of the art Micromatic glass rinse chillers to further enhance the overall experience.

Blitz patrons also have the option of  grabbing growlers and a selection of 22-ounce bottles  to go as well. Kudos to Blitz for stepping up their craft beer game, even further illustrating why Portland truly is “Beervana.”