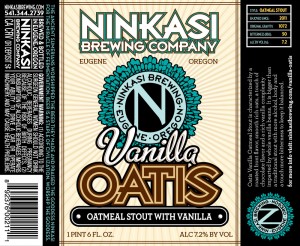 To create this brew, whole vanilla beans from Eugene’s Singing Dog Vanilla were added to the fermentation tank, essentially dry-hopping the beer with an intoxicating vanilla flavor.

Tasting Notes                    Vanilla Oatis Oatmeal Stout is characterized by a roasted front flavor, smooth rich oats, a touch of chocolate flavor, and a rich vanilla complexity imparted by whole vanilla beans. It is bigger than a traditional stout with more alcohol, body and a touch more bitterness to keep it balanced.

“The 12oz, 12-packs are a convenient way to maximize the Ninkasi experience,” says Nikos Ridge, Ninkasi Brewing Company co-founder and CEO. “Each box contains 12 opportunities to create great times, share with friends, have fun experiences, and generally ‘Perpetuate Better Living’ – the driving purpose of our brewery.”

Ninkasi’s Flagship Total Domination IPA has a citrusy, floral hop aroma, and big hop flavor balanced with a richness imparted by Carahell and Munich malts. This beer is a big, flavorful Northwest IPA that maintains its drinkability, and as such, has garnered great admiration from the novice craft drinker and the seasoned hop-head alike. For the first time ever, this crowd-pleaser will be available in 12oz., 12-pack cases for more enjoyment in convenient 12oz. bottles.