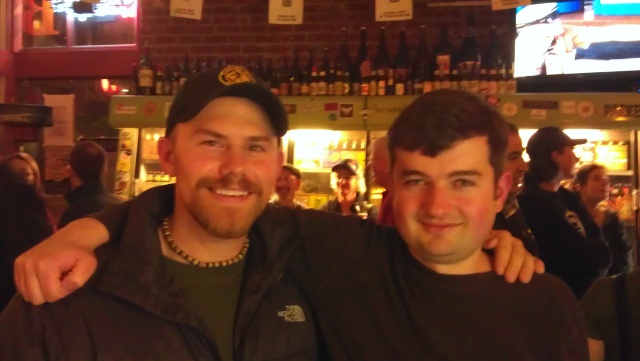 Walking Man Brewing of Stevenson, Washington is known far and wide as one of the best brewpubs on the planet. With scenic summer views of the Columbia River to the south, and near a seeming endless supply of breathtaking naturescapes in the heart of the Gorge, it’s really the beer that draws in an audience from far and wide. Brewmaster Dan Munch and assistant brewer Adam McClure have continued to produce the world class beers that previous brewers such as Jacob Leonard and founder Bob Craig have led folks to expect from this “a quaint riverside drinking town with a windsurfing problem.”

Starting on Wednesday November 16, 2011 and running through Sunday November 20, Walking Man will toast their 11th anniversary by tapping some of their best offerings including a day devoted to sour brews. Here’s a schedule from Munch revealing what will be gracing the taps this week:

November 16th – 20th at the Walking Man Brew Pub in Stevenson, Washington, from open till close

In celebration of their eleventh anniversary, Walking Man Brewing will release limited vintage and rare “one off” keg concoctions, as well as the new seasonal release of HIGH ROAD SCOTCH ALE!

Each night of the week, Wednesday till Saturday, the brewers will change up a number of the taps and feature several unique brews, from Big Beers to Sours, and from Stouts to IPAs. Special food pairings will also be featured each night to compliment the beer selection. On Sunday, the taps will be filled with whatever they have left and feel like drinking! Due to limited supply, growler fills unfortunately will not be available on a few select beers.  Walking Man invites all to come raise their glasses as a prost to ELEVEN YEARS OF BREWING!!

Some of the beers to be released include: