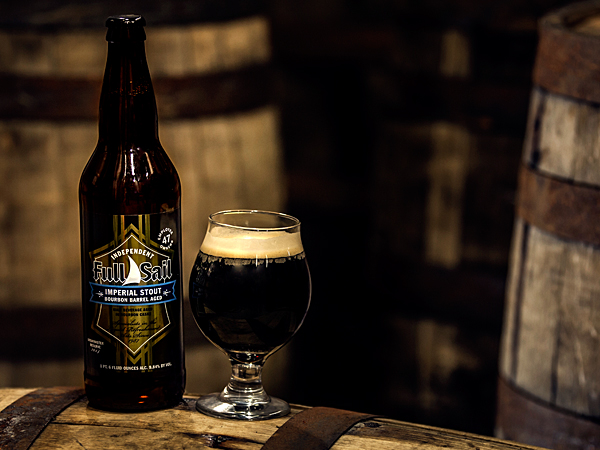 Hitting store shelves in early February will be Full Sail Brewing‘s 2014 Bourbon Barrel-Aged Imperial Stout. This beer has been sitting in three different Kentucky Bourbon casks since December 2012. That’s some aging. And to unveil this dark, rich beauty, Full Sail will be hosting a couple of Horizontal Tasting events in Hood River and Portland that will feature beer from each of the three barrels along with the final blend.

The tasting at the Full Sail Brewpub in Hood River takes place on Thursday, February 6th beginning at 5pm. Then the second tasting will be the following week at Full Sail’s Riverplace Brewery in Portland, Oregon on Monday, February 10th kicking off at 6pm. Having attended these tastings in the past, they are ones not to miss.

Learn more about the beer and both tasting events from Full Sail’s press release below:

Hood River, Oregon – In the 1990s, a master distiller visiting from Scotland, and a Brewmaster from a small brewery in Hood River, serendipitously crossed paths. Over a pint or two, they shared their labors of love and pondered a rather intriguing question: what would happen if beer and distilled spirits met somewhere along the way? The outcome of their inspiration was Full Sail’s Bourbon Barrel Aged Imperial Stout, an annual celebration of the best of American beer and American bourbon. With a tip of the hat to the Scotsman that inspired the idea, Full Sail offers this finely crafted beer for a limited time.

Full Sail Brewing will release their 2014 Full Sail Bourbon Barrel Aged Imperial Stout in early February. This beer has been patiently and carefully aging in bourbon casks for over a year. Highly anticipated by beer lovers every year, this release from the Brewery has received numerous accolades over the years, including gold and silver medals, five star ratings, and a bounty of happy customers.

This beer was brewed in December of 2012 and aged in Kentucky bourbon casks from Heaven Hill, Four Roses, and Makers Mark. This extended aging presents hints of vanilla and allows the Imperial Stout to pick up the flavors of the wood, bourbon, and oak. The aging accentuates the robust character of the Imperial Stout and brings out the depth of flavor from the bourbon, creating chocolate and caramel notes and an overall elegantly sophisticated beer. The beer is racked in small batches and is available in only very limited quantities. It cellars well, so if you store a few bottles in a dark, cool place and be patient, you will be rewarded for your effort and restraint. This special beer is available early February in 22oz. bottles and draft. ABV 9.84% IBU 40 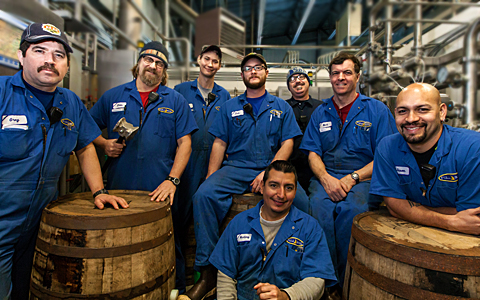 To celebrate the release of this beer, Full Sail is planning two Horizontal Tasting events that highlight the individual bourbons. “Bourbon Barrel Aged Imperial Stout is a blend of the three barrel varieties, Heaven Hill, Four Roses, and Maker’s Mark, so we thought it would be interesting to try a bit of each before blending. We kegged off a very small stash of each variety for the release. Join us to celebrate the release and taste the differences between the three individual bourbons and the final blend,” welcomed Full Sail Executive Brewmaster Jamie Emmerson. The special tapping will take place at 5 p.m., Thursday, February 6th, at Full Sail’s Brew Pub in Hood River and at Full Sail’s Riverplace Brewery in Portland, Oregon on Monday, February 10th at 6 p.m. in the Pilsner Room. For more information call the Full Sail Brew Pub at 541-386-2247.

About Full Sail Brewing Company:
The independent and employee-owned Full Sail Brewery is perched on a bluff in Hood River, Oregon, overlooking the most epic wind and kite surfing spot in the world. At this very moment our specialists in the liquid refreshment arts are crafting barley and hops into your next beer. Among the company’s most popular brews are Full Sail Amber, IPA, Limited Lager Series, Pub Ale Series, Session Premium, Session Black, and Session Fest lagers. Founded in 1987, the Full Sail crew has been fermenting award winning godlike nectar for 26 years, and is committed to brewing great beer sustainably. The Full Sail Brew Pub is open seven days a week. Swing by for a pint, grab a bite, tour the brewery, or just soak up the view.