Thanks to his dedication to sour beers, Cascade brewmaster Ron Gansberg has developed a reputation as one of Oregon’s most innovative brewers; a brewer who looks to yeast and barrel-aging rather than hops to produce flavor.  There are typically 50 or more barrels racked in Cascade’s brewhouse at any given time, aging and souring for months on end. 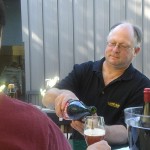 The Great American Beer Festival is the largest and most prestigious competition for American craft beers. This year’s competition featured 2,902 beers from 472 breweries. A panel of 127 judges from 11 countries worked three days to award 222 medals in 75 categories.  There were a total of 27 entries in the Wood- and Barrel-Aged Sour Beer category.

Located in the Raleigh Hills neighborhood of SW Portland, Cascade Brewing Company was established in 1998 by Art Larrance, who has been involved in Oregon’s craft beer industry since its inception.  Art co-founded one of the state’s first microbreweries, Portland Brewing, as well as the Oregon Brewers Festival, which today is one of the world’s preeminent craft beer festivals.

Cascade Brewing offers eight well-balanced beers on draught year-round, complemented by seasonal selections.  The award-winning Cascade Kriek is hand bottled in 750 ml champagne bottles and sells for $15.95, along with Cascade Blackberry, Apricot, and Cuvee.  These can be purchased at the brewery, as well as at other Portland retailers such as Belmont Station and John’s Market Place.