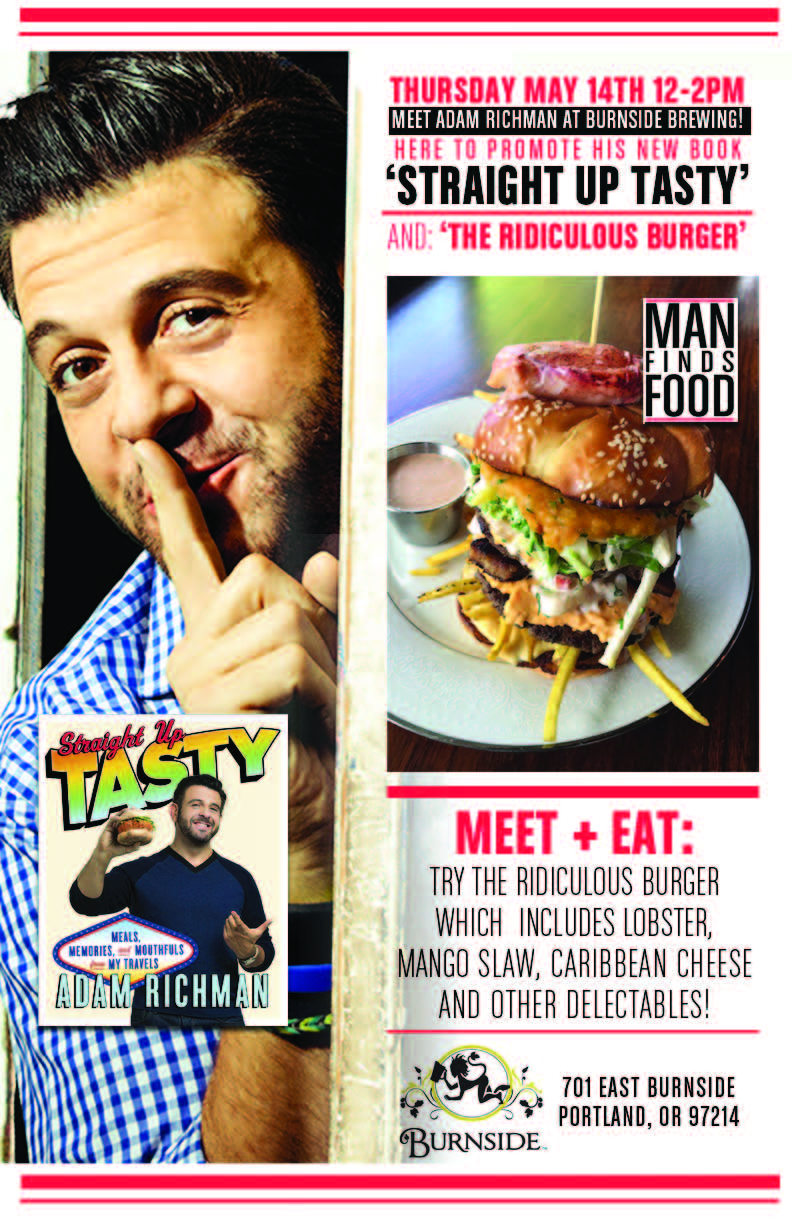 Monday May 11, 2015 – Portland, OR – Burnside Brewing Co. is proud to host the Travel Channel‘s Man v. Food host Adam Richman at the brewery this Thursday, May 14th, to promote his new book, Straight up Tasty. Burnside Brewing’s kitchen will also unleash a limited number of servings of ‘,’ winner of the first The Hop & Vine Brewers Burger Brawl (ed note: it has been brought to our attention that this was not the winning burger as the press release inaccurately stated. The winning burger that year was the “Hot Damn Burger” from Burnside. “The Ridiculous Burger” was entered the 2nd year and lost to Oakshire Brewing’s entry.) and destined to appear on an upcoming TV show. Get the book, the burger, and a beer for only $50, only on Thursday.

Burnside Brewing will prepare only 30 ridiculous burgers for the day for $30 each or for a special one-day deal: Richman’s book Straight up Tasty + The Ridiculous Burger + a pint of Burnside’s Sweet Heat for just $50. 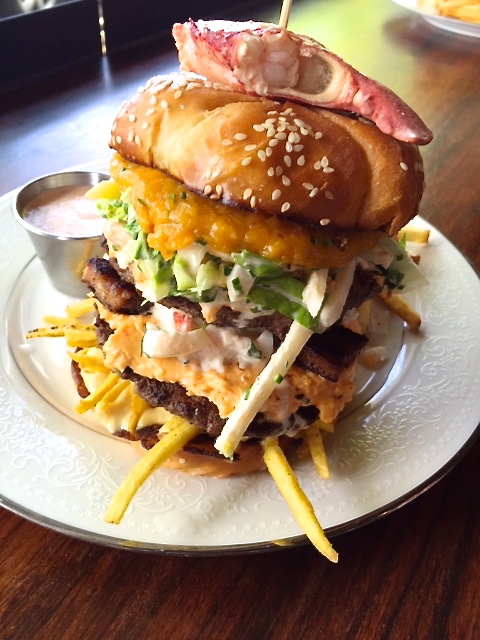 About the book Straight up Tasty
The much anticipated first cookbook from Adam Richman, the irrepressible host of Man v. Food and NBC’s Food Fighters, delivers what his fans have been waiting for: a heaping helping of over-the-top flavors with a side order of the erudite humor that is his trademark.

Having eaten his way from coast to coast and around the globe, Adam Richman has learned more than a little bit about what makes food taste good. He draws on all that knowledge and his lifelong dedication to seeking out memorable flavors and eating experiences in this high octane collection of dishes that are, quite simply, straight up tasty.

The more than 100 diverse, dazzling, and downright delectable recipes reflect the flavor combinations, techniques, and ingredients Adam has encountered in his nonstop travels, all translated into easy-to-use recipes perfect for the home cook, and all given a distinctive Richman spin.

About Adam Richman
Adam Richman grew up in the food Mecca of New York City and began his love affair with food early on, sampling all of the diverse culinary specialties The Big Apple had to offer. From samosas to sushi, even at a young age, Adam had a desire to taste it all.

Years later, as an undergraduate at Emory University in Atlanta, Georgia, Adam began a food journal to document the standout food establishments he was discovering throughout the Southeastern U.S. Though he majored in International Studies, his love of all things edible naturally drew him into the culinary world after graduation. Subsequently, he built a solid resume working in nearly every echelon of the restaurant world, from coast-to-coast and from the counter to the kitchen. Though he never trained professionally, Adam was able to gain invaluable on-the-job experience in the various restaurants he worked in.

After earning a master’s degree in Fine Art from Yale University’s School of Drama, Adam traveled the United States acting in many regional theaters. The nature of his work allowed him to feed his appetite for the best local dishes across America – all of which found their way into his food journal. In 2008, Adam began hosting Man v. Food for the Travel Channel, which quickly became their highest rated show. With Man v. Food Nation, Adam Richman’s Best Sandwich in America and Fandemonium Adam not only hosted but co-Executive Produced.  His next show on Travel Channel, Man Finds Food, in which he stars and produces, premiered on April 1, 2015.

In 2014 he hosted NBC’s new food competition show Food Fighters, which delivered the biggest regularly scheduled week-one to week-two gain in it’s demographic for any new series on the Big 4 networks in several years. The second season will premiere in 2015.

Adam’s first book, America the Edible (Rodale Publishing), hit stands November 9, 2010 and his second book Straight-Up Tasty (Clarkson Potter), will be on stands May 12, 2015. Adam is a board member of the Armed Services Foundation and in 2009 and 2012 he won the CableFax award for Best Host. Aside from TV, Adam has acted in numerous theater productions in NY and a variety of TV shows.