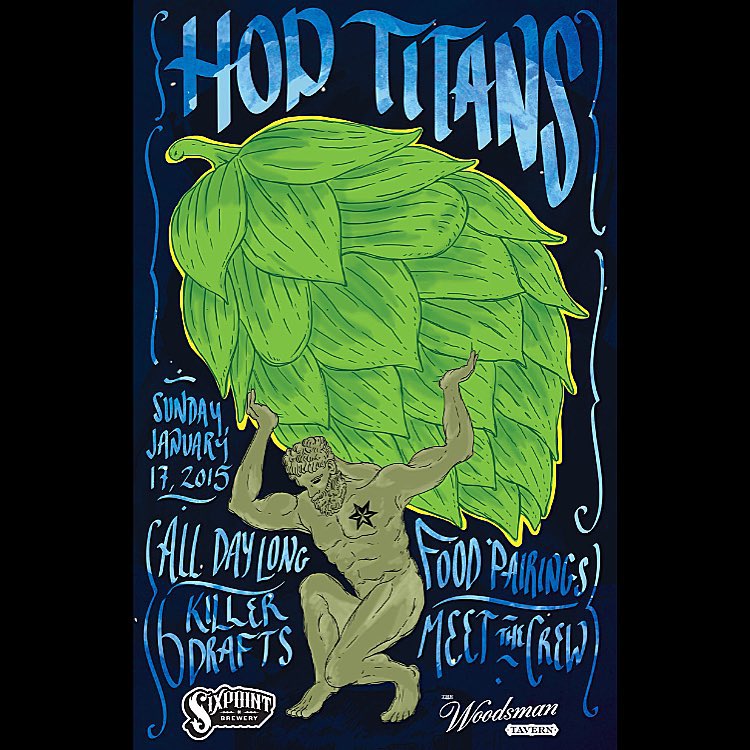 On Sunday, January 17, Sixpoint Brewery will be taking over six taps at The Woodsman Tavern all day long. What makes this day a bit more special is that The Woodsman will be serving Sixpoint’s new Farm To Pint IPA. This new IPA that used the new Idaho 7 hop will only be available at The Woodsman.

The festivities begin at 9:00am for The Woodsman brunch. Then from 2:00 to 5:00pm it’s Oyster Hour featuring a dozen oysters and two pints of Sixpoint Crisp for $30!

At 5:00pm expect to meet some of Sixpoint Brewery’s team along with a few hop growers. This is also the time when The Woodsman’s dinner begins with Sixpoint and food pairings.

Farm to Pint IPA
ABV 7.8 %
IBU 60
On the nose it has a nice mellow hop aroma that is closer associated with the classic C hops. Slightly fruity with citrus notes. I get a lot of hop flavor in this beer. More hop flavor than aroma. Juicy, citrus hop flavor that is very nice. It is a nice, balanced, approachable IPA that is not too overwhelming. Brewed with Chinook, Cascade, Idaho 7, and Sorachi Ace hops.

Bengali IPA
ABV 6.5%
IBU 69
The Sixpoint homebrewed IPA interpretation. Blaze orange in color, with an abundance of citrus hop bitterness, and a full pine and grapefruit bouquet in the aroma. Lighter in body with a more nuanced hop character that plays on the palate without a lingering bitterness on the finish.

Resin IIPA
ABV 9.1%
IBU 103
A beer that celebrates the extraction of hop resin for a concentrated yet balanced brew. A double IPA that balances a big resinous hop character with an accentuated malt bill to create an insanely sessionable IPA. Big notes of grapefruit and pine on the nose, juicy hop flavor, and a mild lingering bitterness on the finish.

C.R.E.A.M Blonde Coffee Ale
ABV 7.2%
IBU 25
The C.R.E.A.M. is brewed with a blend of pilsner and two-row pale and crystal malts, and stored cool for an extended period of time, and blended with cold-brewed coffee from Stumptown Coffee Roasters. The result is a golden blonde ale with the unmistakable aroma of Finca El Inject.