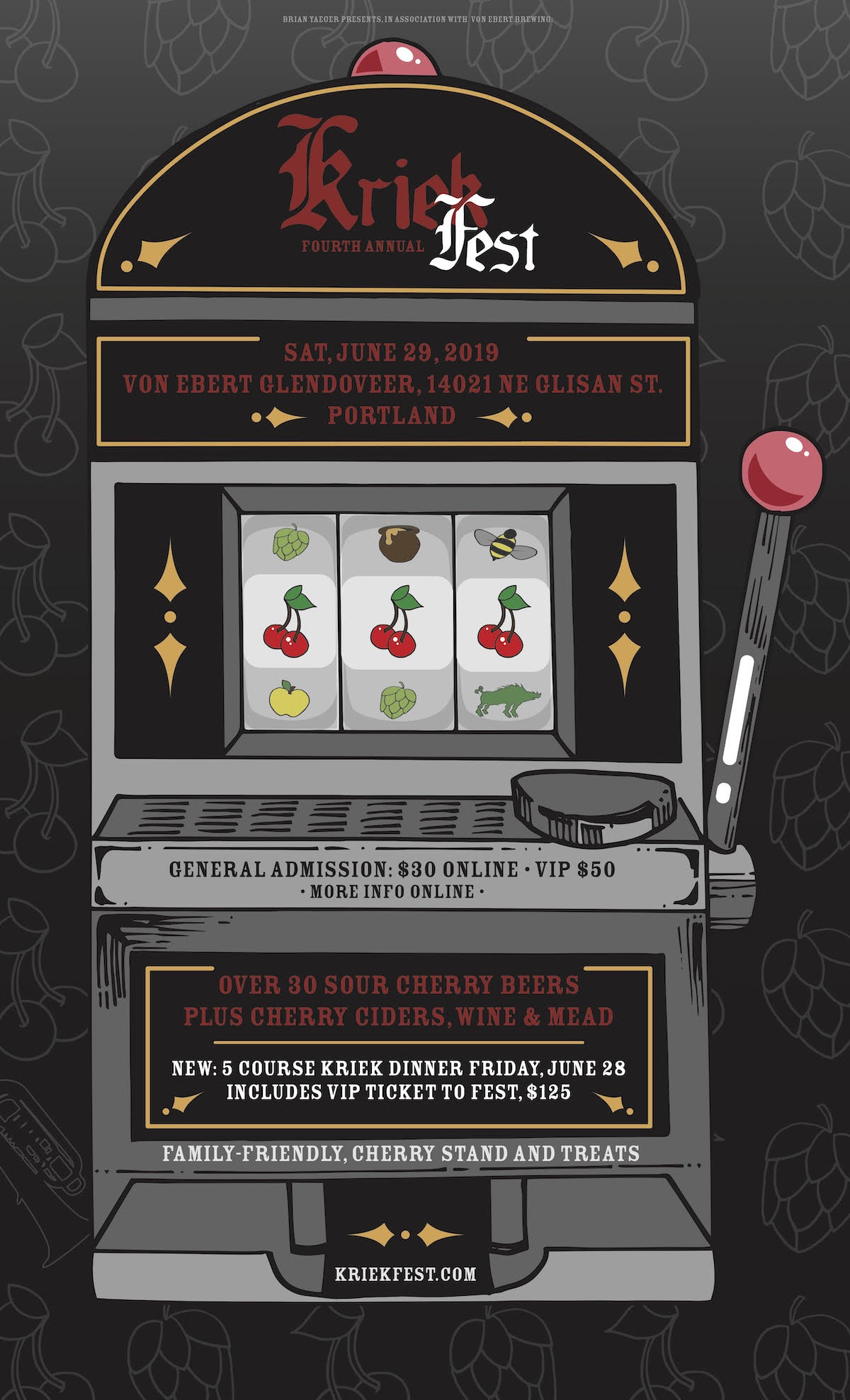 Four years in, Kriekfest returns in 2019 to a new venue and city. The 4th annual Kriekfest will take place at Von Ebert Brewing Glendoveer on Portland’s far eastside on Saturday, June 29th from 11:30am-7:00pm. Plus, this year will also feature a new five-course Kriek Dinner that will place on the eve of Kriekfest.

After being held in Parkdale, Oregon its first two years and Hood River last year, Kriekfest is moving to the big city. The fest may be a bit farther from the orchards of the Hood River Valley, but it will continue to be the largest celebration devoted exclusively to barrel-aged cherry beverages. Beyond the assortment of cherry beers, there will also be cherry cider, cherry mead, and sparkling cherry wine!

Prior to the start of Kriekfest, Von Ebert Brewing – Glendoveer will host a five-course kriek pairing dinner that will be held the evening prior on Friday, June 28th. Dinner tickets are extremely limited and cost $125, which includes the meal and beverages, a commemorative stemmed glass, gratuity, and Kriekfest VIP admission the next day.

Kriekfest 2019 festival and dinner tickets are available now at merctickets.com/go/kriekfest. Advanced general admission costs $30 and includes six drink tickets. Advanced VIP admission is $50 and includes 13 drink tickets and half-hour early admission. GA is $40 and VIP is $60 at the gate. All beverages will be available in four-ounce pours; additional tasting tickets can be purchased onsite for $2 each. Minors and designated drivers receive free admission.

This year’s Kriekfest will see a beer list of krieks made from around the globe. With over 30 beverage makers, Kriekfest 2019 will bring together many world-class examples imported from Belgium and beyond, including Brasserie Cantillon, Brasserie Fantôme, Brouwerij Drei Fonteinen, Brouwerij Boon, Brouwerij Brasserie De Ranke, and Hanssens Artisanaal.

Kriekfest is family-friendly and in addition to the kriek pouring, there will be a cherry marketplace and other delicious food. For more information visit Kriekfest.com and follow updates on social media at @Kriekfest.