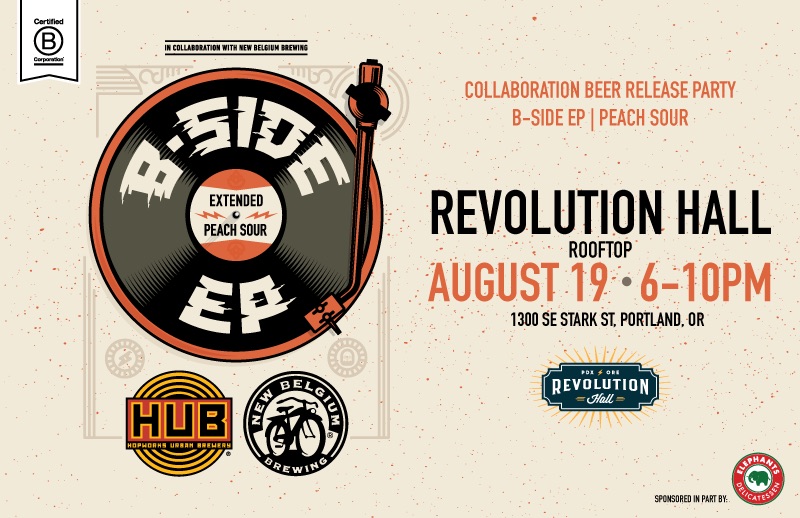 Earlier this year Hopworks Urban Brewery traveled to Fort Collins, Colorado to brew a collaboration beer with New Belgium Brewing. This beer, B-Side Organic Peach IPA, was brewed for this year’s Oregon Brewers Festival. While the Oregon Brewers Festival was taking place brewers from New Belgium were here in Portland and they once again collaborated with Hopworks on another beer, Organic B-Side EP. This kettle soured peach ale was brewed at Hopworks with members from both companies’ brewing teams and will be released at a Rooftop Party at Revolution Hall in Portland on August 19 from 6:00 to 10:00pm.

Organic B-Side EP is described as having a light tartness and hints of stone fruit while remaining bright and crisp. Also available that night at Revolution Hall is B-Side Organic Peach IPA, the first collaboration between the two breweries, along with a number of other beers from the respective breweries. After sampling the original B-Side Organic Peach IPA while at this year’s OBF we hope the new kettled sour version will offer up more peach flavors as the original IPA seemed to be lacking any strong presence of peach.

During the Organic B-Side EP release party on August 19, visitors will have the opportunity to try the limited B-Side EP for the first time while enjoying sweeping views of downtown Portland from the rooftop of Revolution Hall. The party is open to the public. Light catering is provided by Elephants Catering and in honor of the B Corp themed party, B Corporations across Portland will showcase products. Members of HUB and New Belgium’s team will be on hand to chat about beer, B Corps, bikes, or anything else that starts with B.

To stay up to date on the B-Side Organic Peach IPA Release Party follow the event’s Facebook Event Page.