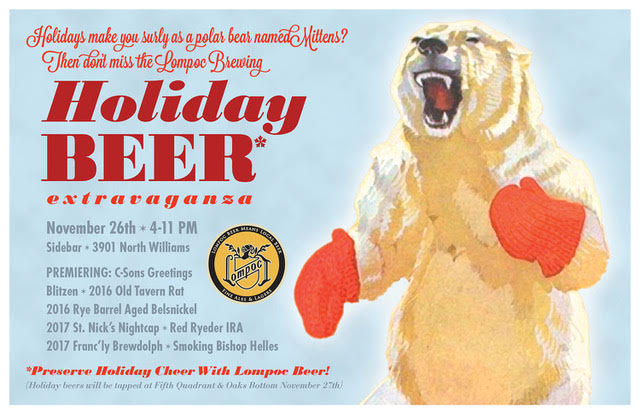 The 2018 Holiday Beer Extravaganza will take place on Monday, November 26th from 4:00-11:00pm at Lompoc Sidebar. The beers will go on tap at Oaks Bottom and 5th Quadrant on Tuesday, November 27th. C-Sons Greetings, will also be released in 22-oz. bottles and will be available at the release party.

Here’s a preview of the eight beers that are part of Lompoc’s 2018 Holiday Beer Extravaganza.

Blitzen: A bright, straw-colored holiday favorite, this golden ale is dry hopped with Centennial hops, orange peel, coriander, and cinnamon. The hops and orange peel combine for a citrusy aroma and flavor with a slight spice finish. Something tells us Rudolph won’t be your favorite reindeer anymore! 4.6% ABV

Smoking Bishop Helles: Let us take you on a holiday journey with this German-style lager that was brewed with smoked malts from Weyerman Malting. With an aroma that will remind you of cozying up to the fire, this golden lager has a crisp and dry finish. 5.1% ABV

Red Ryeder IRA: This India red ale is a collaboration with Nomcraft Brewing out of Aridagawa, Japan. Crimson in color with a citrus and spice profile, it’s everything you’ll want on your Christmas list…just be careful not to shoot your eye out! 6.7% ABV

2016 Old Tavern Rat: A dark amber colored barley wine that was aged for two years prior to its release, this barley wine features a strong bitterness that is balanced with the sweetness of caramel and toffee flavors. 9.4% ABV

2016 Rye Barrel Aged Belsnickel: Whether you’ve been impish or admirable, a visit from Belsnickel is a critical part of Christmas. This robust American porter was aged in Heaven Hill Distillery rye whiskey barrels for two years. Hints of oak, chocolate, tobacco, and roasted malts permeate the palate. 6.2% ABV

2017 Franc’ly Brewdolph: This Belgian-style red ale was aged in Maryhill Winery Cabernet Franc barrels for 11 months. It has an oaky aroma with a mild fruitiness, finishing with a spicy clove flavor. Sure to go down in history. 7.7% ABV

2017 St. Nick’s Nightcap: This Bier de Garde is a malt-forward French style pale ale that was aged for 17 months in Maryhill Winery Cabernet Sauvignon barrels. Reddish-bronze in color with a toasted oak aroma, it has a malty sweetness with flavors of rhubarb and tart cherry. 7.2% ABV