Pacific City, Oregon (April 9, 2019)—With a deep commitment to its brewery staff and the mission of the Pink Boots Society, Pelican Brewing Company this month releases its inaugural Pink Boots India Pale Lager. Pelican brewer and Pink Boots Society member, Cat Wiest, collaborated on the beer with female colleagues to celebrate the contributions of women in brewing—the extraordinary product of the team is a unique lager recipe that at once offers a bready, sweet roll maltiness and a super clean finish. Pelican Pink Boots will be on tap later this month at Pelican brewpubs and other participating watering holes.

Pink Boots collaboration brews are an industry-wide fundraiser to benefit outreach and scholarships for women in the brewing industry. This beer was designed and brewed in collaboration with multiple female brewing professionals from across the Northwest—in addition to Pink Boots Society founder Teri Fahrendorf. Using a proprietary hop blend created by adventurous, visionary female brewers from across the globe, Pelican Pink Boots IPL features the white grapefruit, cedar, floral and earthy aromas from this special blend.  A malt flavor reminiscent of Kings Hawaiian sweet rolls adds a delicious toasty balance, and lager yeast offers an amazingly approachable finish. Enjoy this draft-only lager knowing that the sisters are brewing it for themselves!

Pelican Pink Boots IPL includes a proprietary blend from Yakima Chief Hops which this year partnered with the Pink Boots Society to create an exclusive hop blend for brewers around the world participating in Pink Boots Collaboration Brew Day. Available for a limited time to commercial brewers, this seasonal hop blend celebrates women in the beer and brewing industry with a portion of proceeds going to Pink Boots Society scholarship funds. 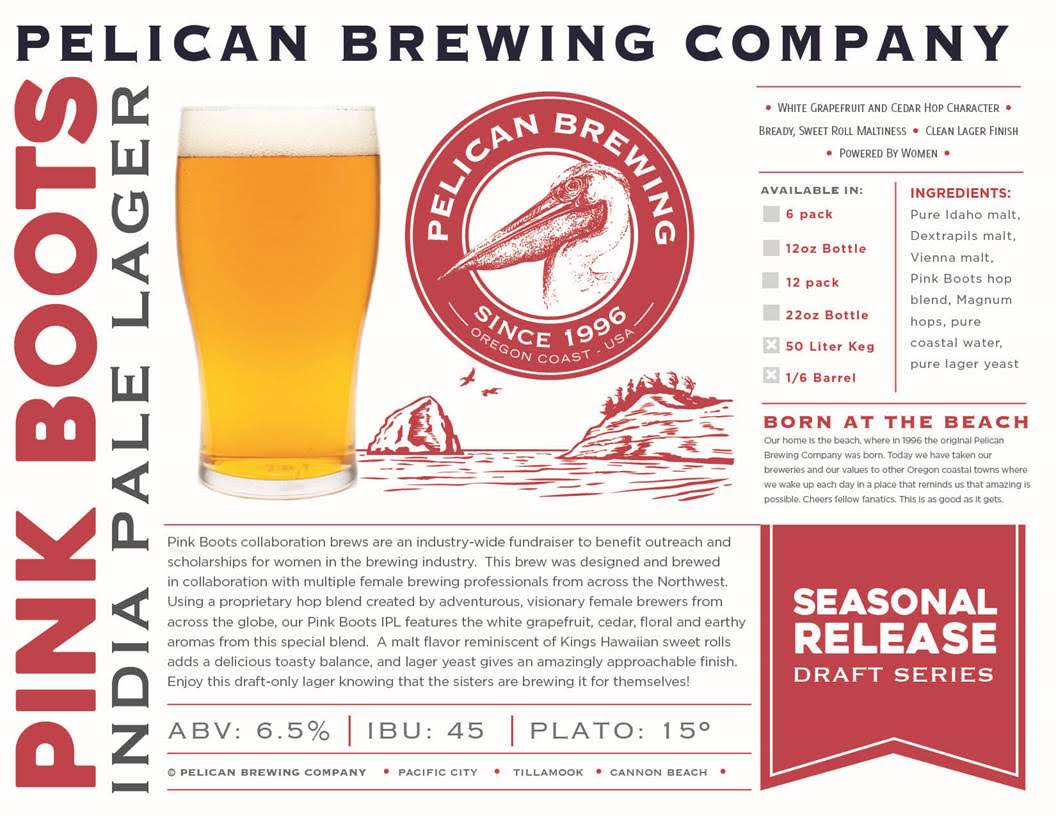 “One of the things that makes Collaboration Brew Day so special is that it allows us to work side-by-side with our peers, mentors, and role models to innovate a beautiful new beer,” says Wiest. “I am grateful that Pelican has been so supportive of this creation and our mission to advance women’s careers in the industry.”

Pink Boots Society splits proceeds from sales of this collaboration brew with participating chapters. The revenue is applied to educational scholarships and programming for its members. Pelican purchased the hops for the beer and will dedicate a portion of proceeds equally between the national Pink Boots Society and the Oregon chapter.

Like all Pelican beers, Pelican Pink Boots is born at the beach by a team of award-winning craft beer makers known for brewing styles of beer that they themselves love to drink.