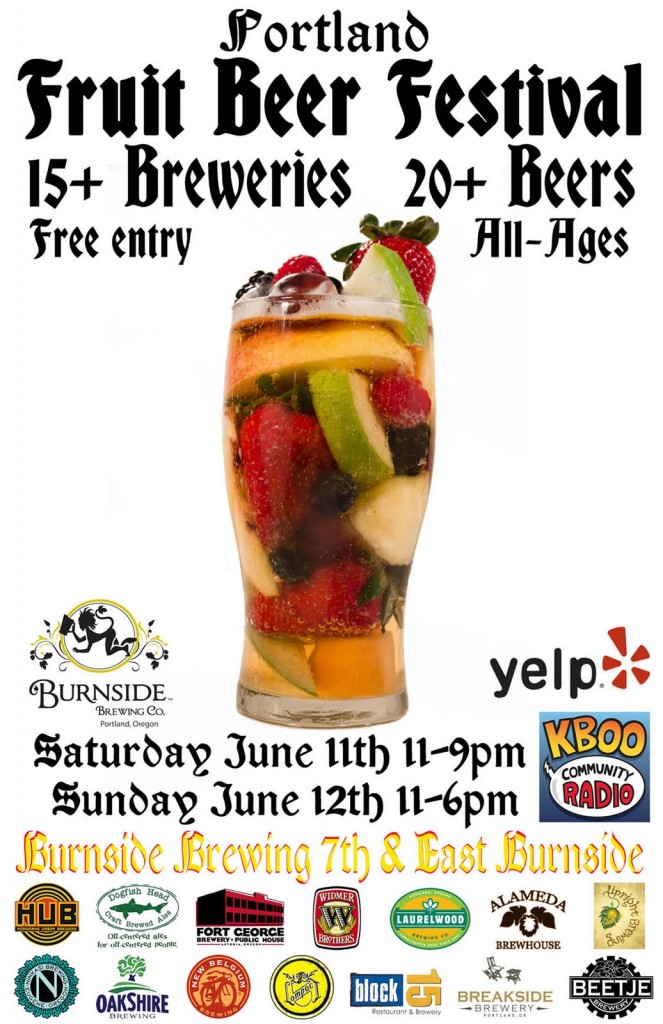 Just when you think you’ve seen and tasted it all as far as beer events are concerned, another uniquely-themed happening unfolds. Coming  June Saturday 11 & Sunday 12, 2011,  Burnside Brewing, a new face in Portland craft brewing, will present the city’s first ever Fruit Beer Festival (PFBF).

One of the organizers of this event, Ezra Johnson-Greenough relates fruit beers as “the red-headed stepchild of craft beer,” pointing to many misconceptions by some craft beer drinkers who often envision an overly sweet, doltishly boring, or artificially flavored product. With this festival, the organizers aims to extricate fruit brews from such trappings and stereotypes.  Says Johnson-Greenough “(This) fruit beer fest aims to change all that and open minds to the strange and exotic possibilities that fruit beers can offer.”

More than15 breweries, most of which are from the Northwest, will showcase more than 20 different brews at the Portland Fruit Beer Festival. Says the organizers “(This) is a celebration of the wonderful variety that fruits offer and the incredible and unique beers brewers can make with them. During these two late spring days of June, Burnside Brewing’s parking lot will turn into the festival grounds.

Beers and Breweries:
Festival organizers approached brewers with the challenge of making original beers using real whole, pureed, or juiced fruits without using any of the extracts or flavorings that have contributed to giving fruit beers a bad name. Brewers stepped up to the plate with beers ranging from Hopworks Belgian Red Delicious Apple Biere to Laurelwood’s Asian fruit and spice beer. Since many Oregon beer drinkers love the hops, and fruit beers are known for not coming through in that department, PFBF looks to change all of this. Hopheads will likely enjoy Breakside Brewery’s Mango IPA and Alameda’s Yellow Wolf Imperial IPA infused with huckleberries, among others. In all, more than 15 breweries will be participating with over 20 beers to choose from: Burnside Brewing, Hopworks Urban Brewing, Ninkasi, Dogfish Head, Widmer Brothers, New Belgium, Upright, Cascade, Oakshire, Block 15, Laurelwood, Fort George, Breakside, Lompoc, Alameda, Double Mountain and Beetje Brewing.

Homebrewing Competition:
Adding to the fun will also be a Homebrewers Competition organzied by the Oregon Brew Crew. Homebrewers will be given the same challenge as the pro brewers – to brew the freshest and most original fruit beers they can. Judging will take place in three different categories: light, dark, and sour fruit beers. Prizes will be offered to the victors in each category, as well as a grand prize for Best in Show. All profits from the $6 entry fee will be donated back to the OBC, a non-profit organization devoted to promoting the art of homebrewing. More info can be found here.

Food and Entertainment:
In addition to the main attraction of beer, there will also be food vendors like Tastebud, which will be making delicious wood-fired pizzas and bagel sandwiches with fresh ingredients, and Burnside Brewing with their own outdoor BBQ and grill catering. For those not drinking alcohol, sodas and juice refreshments will be available, and you can expect Live Music/DJ’s TBA.

If you are interested involunteering at PFPF and have an OLCC servers permit,

The shifts are only 3 1/2 hours long. For each shift you work, you will get a glass and 8 tickets.