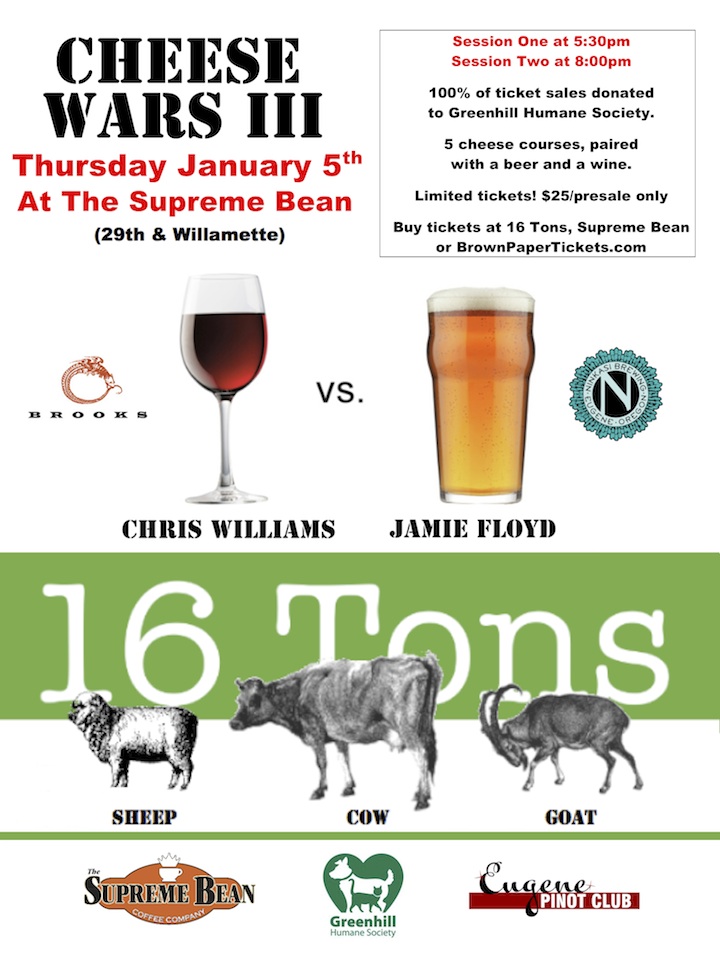 On Thursday January 5, 2012, Eugene’s The Supreme Bean at 29th & Willamette will host a most exciting event: CHEESE WARS III. Cheese Wars is a food-pairing showdown between two ancient beverages. Says 16 Tons co-founder Mike Coplin, “We will feature five courses of rustic, gourmet cheese, many coming from local sources. Each cheese course will be paired with a beer and a wine. Ninkasi Brewing founder and Brewmaster Jamie Floyd will choose and present the beers. Winemaker Chris Williams of Brooks Winery will choose and present the wines.”

Which pairings work best only you can decide. Cheese Wars is a fantastic opportunity to learn about the processes of making beer, wine, and cheese. This is a fun and lively sit down affair! Tickets are limited. $25 includes all tasting and food (cheese and bread). Purchase tickets at 16 Tons Beer and Wine, The Supreme Bean or online at BrownPaperTickets.com. There is a 5:30PM session and an 8PM session, each lasting approximately two hours.

About Ninkasi Brewing Company : Ninkasi Brewing began on June 15th, 2006 when Jamie Floyd and Nikos Ridge spent 17 hours brewing their first batch of Total Domination IPA in leased space inside a German restaurant in Springfield, Oregon. Once a brewery, the building was equipped with a 15 barrel brew house set up for brewpub brewing. A year later, Ninkasi moved to its current location at 272 Van Buren Street, in the Whiteaker neighborhood of Eugene. They now are the fastest growing brewery in the United States, producing 55,000 barrels this year. www.ninkasibrewing.com

About Brooks Winery : FOUNDED in 1998, Brooks is a reflection of the visionary Portland native, Jimi Brooks. His reverence for the land and vines made him a practitioner of organic and biodynamic farming. The great respect for vineyard individuality and mastery of blending, allowed his wines to achieve the greatest depth, flavors and balance. We invite you to visit our NEW WINERY perched on top of the hill in the heart of the Eola-Amity Hills of the Willamette Valley. http://www.brookswine.com