Ugh! The weekend is over alas, but what a great one it was. Another year and we still haven’t made it to the Spring Beer and Wine Fest. Maybe it related to what Bill at It’s Pub Night had to say about beer snobs and this event, or perhaps it was simply that the weather on Friday called for sitting outdoors while enjoying delicious brews. Frankly, that sounded like a better game plan to the group I was with, than drinking inside the Oregon Convention Center. Maybe we’ll check it out next year. 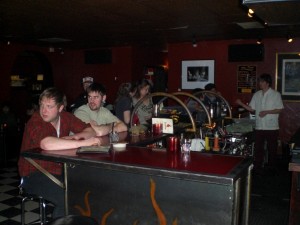 So, organized by my brother Mario, a group of us met at the Bonfire, located on SE Stark and 28th. Here’s

another pub known for its full bar and decent beer selection that I was interested to see how it had changed since the January 1 statewide smoking ban. Inside, Bonfire was dark and a bit dingy, but out front at a picnic table with the sun shining down, I was very pleased. Perhaps one downer about the smoking ban, if any, is that the smokers at bars like this now congregate out front, so outdoor seating involves more secondhand contamination. Still, it will be great once the cold winter months come back around. 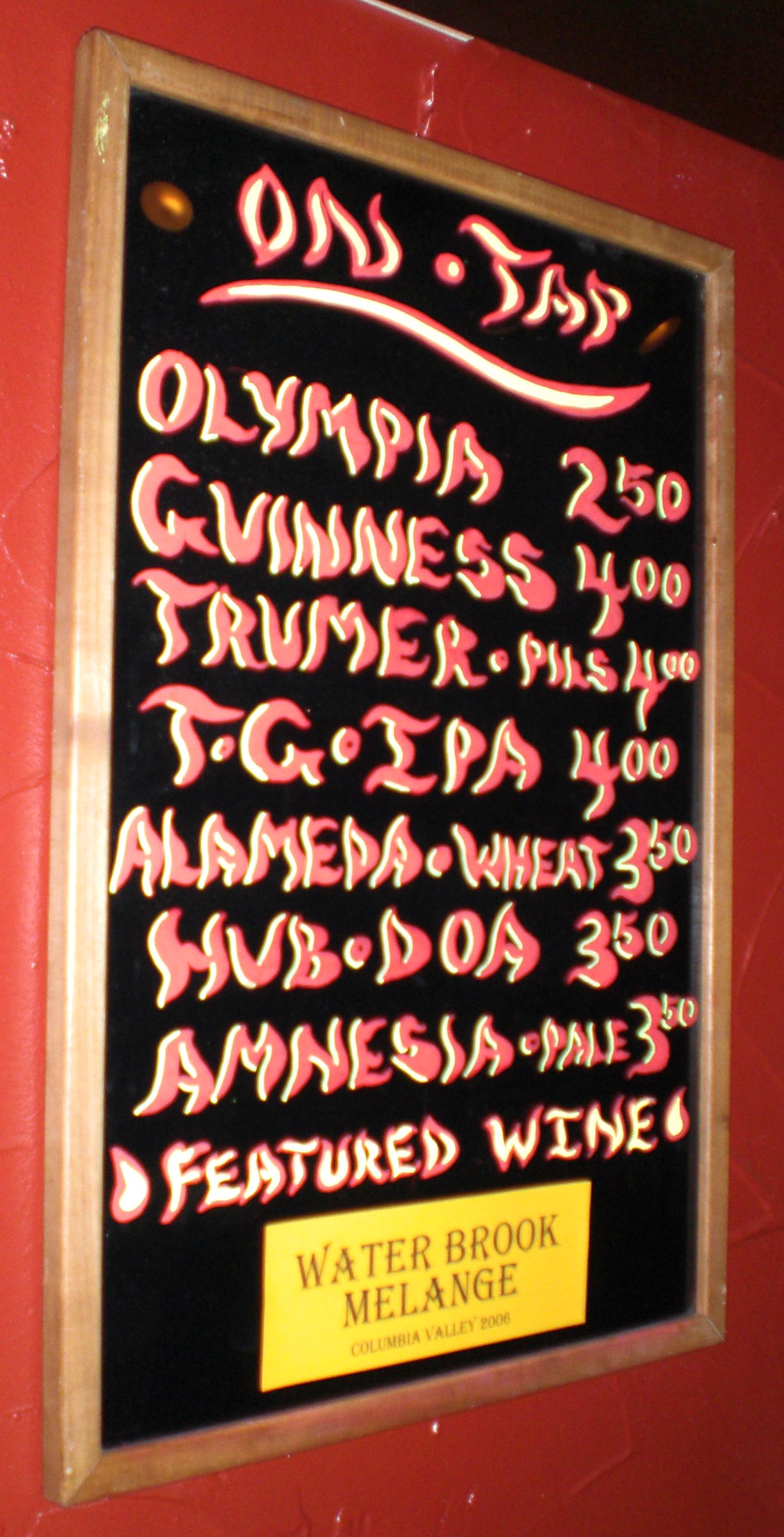 After a few pops at Bonfire, we made our way over to Concordia Alehouse, a place we hadn’t been for a while.

I hate to say it, but Concordia Alehouse has fallen slightly from the heights it once was at. Still delivering a great tap list with 22 micros pouring, Concordia, in recent years has devolved into a Oregon Lotto and game room driven jock bar where the ales pour about 5-10 degrees too cold. It is apparent also that the crew isn’t as geeked about the beers as in days of old, but to give credit where it’s due, the pub is still putting on some great events. Recently, Beer Brawl II, which saw Oregon defeat Washington and California in a blind tasting drew hundreds to celebrate the rich culture of NW beer. A Stone Arrogant Bastard seemed an appropriate fit for my spring palate. After sampling a few of the other folk’s brews, including a Klamath Basin Buttcrack Brown, I have to question how often Concordia cleans their taplines. There were some obvious funky flavors ranging from butterscotch to metal.  A $7 pint of Lindemans Framboise is fit to cleanse any palate. For a strict vegetarian, there isn’t much on the menu.  However, for grease-lovin’ carnivores, Concordia is your place. The vegheads in our crowd were glad they grabbed the cheap vegan tacos at Bonfire. 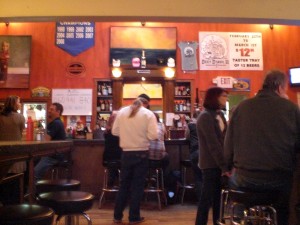 Saturday presented a mix of rain showers and sunshine. This truly is the best time of year in the Pacific Northwest.  While the air is chilly, it’s no where near as unpleasant as places like Maine, Ohio, Minnesota, or New York to name a few. The greenery is uncanny, and on Saturday, the new canopy over Amnesia Brewing‘s outdoor seating section was perfect on this day. We met up with our cousin Tony to sit out side and enjoy a couple rounds of Amnesia, one of Oregon and Portland’s finest breweries.

Friday’s enjoyment of Amnesia’s Dusty Trail Pale had us back to the source for more. Also pouring, the magnificent Copacetic IPA and a roasty, chocolaty Porter to die for. On this day, it was the best option we could think of. The smell of barbecue in the air, birds singing, and in the company of great friends, this was thee way to spend the weekend.

After the sun dropped below the horizon and the nip of early spring revisited the air, a brew at the Blue Monk on Belmont, and a night cap at the Victory Bar seemed fitting. We even got a taste of a ten-year, single-malt Bushmills chased by a one of a kind bourbon barrel-aged Laughing Dog Dogfather Imperial Stout. In addition, Victory had another beer we’d never tried before, Wit-kap’s Pater Dubbel, a rich brown sugary Belgian snifter. Mmmm… 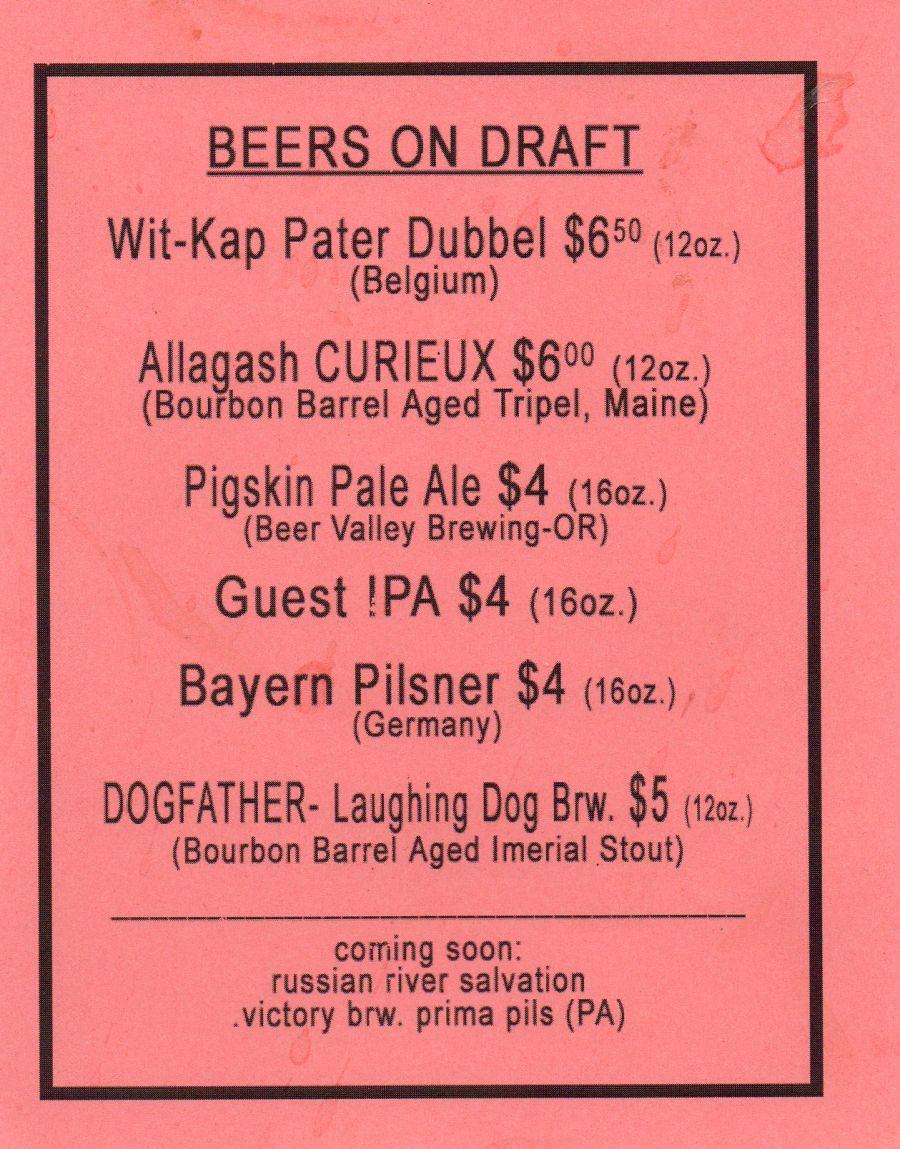 Somewhere in all this, we managed to do some yardwork and gardening. Planted our vegetable garden and weeded/deadheaded at home with a some bottles of craft beer including Southern Tier Chokolat, the chocolatiest beer ever.  We love the weekend!