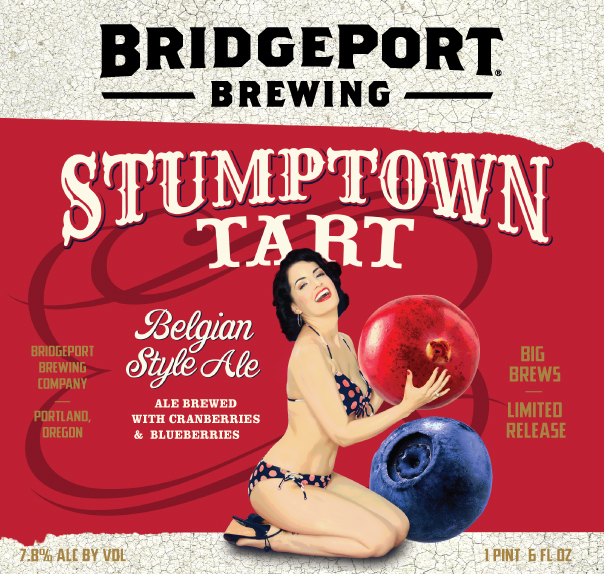 BridgePort Brewing is getting ready to release this year’s version of Stumptown Tart. The ever revolving Stumptown Tart features a different fruit combination for the yearly release. The 2014 version is no different and will feature cranberries and blueberries in this Belgian-Style Ale.

In addition to the blueberries that were featured in last year’s Stumptown Tart, this year’s version will be enhanced with the addition of Oregon grown cranberries. The brewery’s use of cranberries will be the first time that BridgePort has used this Oregon grown berry in a beer.

“I loved the blueberries in last year’s Stumptown Tart and ever since it came out I’ve been thinking about what would pair well with blueberries again. We played with the tartness of cranberries against the mellow sweetness of the blueberries and the whole brewing staff is pretty pleased with how it turned out” states Jeff Edgerton, brewmaster at BridgePort Brewing Company.

“We were surprised about two things when it came to brewing this beer,” commented Edgerton. “The first was that once we combined the cranberries with the base beer, it actually mellowed out the bitter flavor that most of us associate with cranberries. The second was the color. We expected a bright red beer when in fact the skins of the cranberries hardly produced any color leaving the beer light red in color.”

BridgePort will host a Stumptown Tart release party Thursday, May 15 starting at 5:30 p.m. at the BridgePort Brewpub in Northwest Portland. Come be one of the first to try this year’s beloved Stumptown Tart. Bottle label model Bernie Dexter will also be there ready to pose with guests for photo opportunities and to personalize guests’ bottles with an autograph. For $1, guests can snag a smooch from the Stumptown Tart herself along with a picture in the kissing booth. All Donations will go to The American Cancer Society.