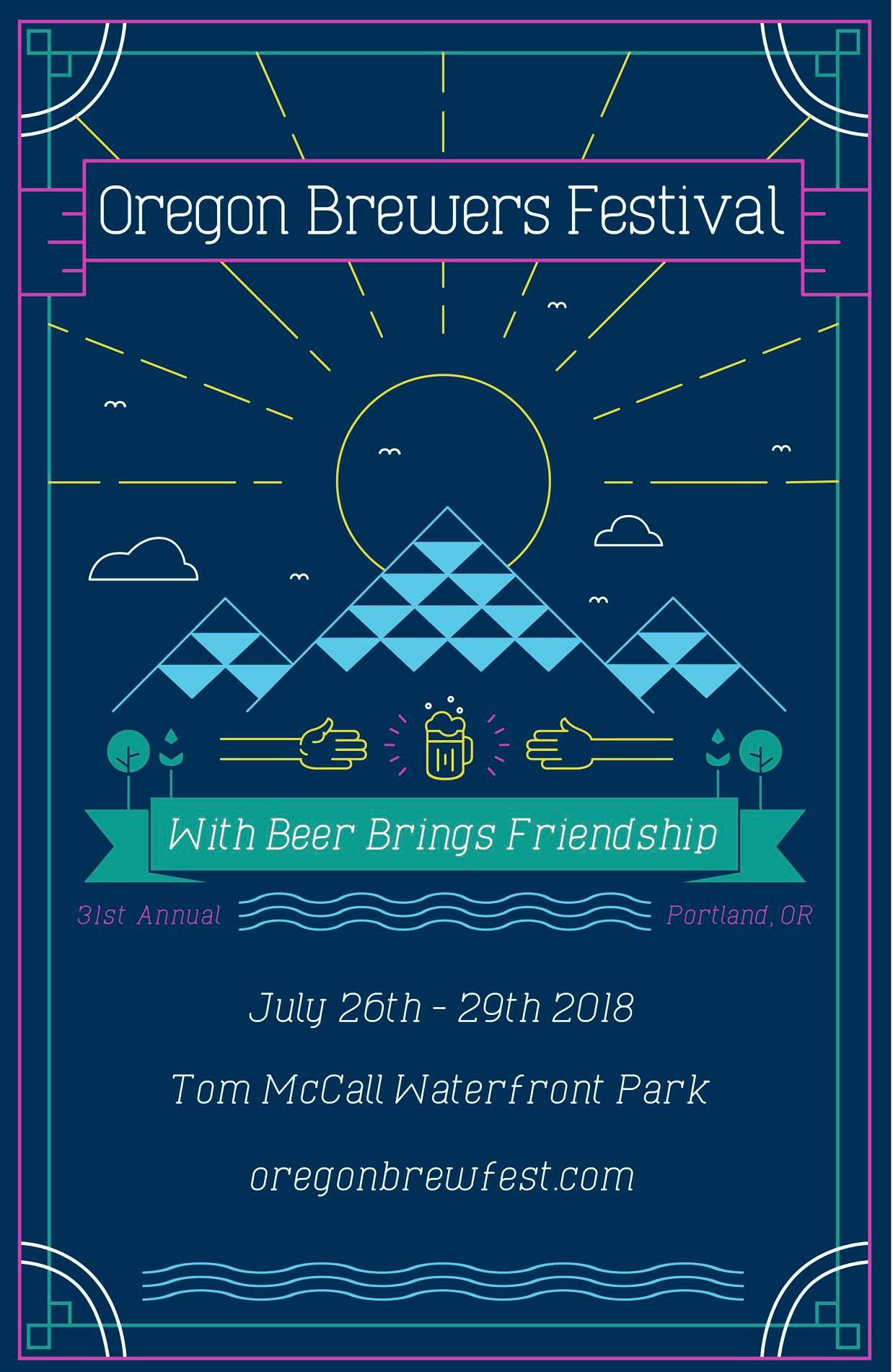 Oregon’s most well-known beer festival is only a little over two weeks away, so its time to be preparing for this annual ritual. The 31st annual Oregon Brewers Festival will once again return to Tom McCall Waterfront Park in Portland from July 26 through July 29, 2018.

As we enter the festival’s 31st year, there will be a few changes to the long-standing beer festival. After five years of the festival taking place during a five day period, organizers are reeling back the event to a four day festival. Attendance peaked at around 70,000 a few years back and has taken a slight hit during the past few years.

Also with the 31st edition of OBF there is a new theme of With Beer Brings Friendship! It’s a bit of a nod to the foreign breweries that have become part of many of the recent OBFs. For 2018 there will be five breweries from Baja California, Mexico. Look for beers by Agua Mala, Border Psycho, Insurgente, Transpeninsular, and Wendlandt as these Mexican beers will be pouring alongside the regular festival beers in the eight main trailers as opposed to a specialty tent that has been utilized in years past.

When it comes the charitable side of OBF this year the festival has pledged $20,000 to two local beneficiaries, each receiving $10,000. The first is Habitat for Humanity Portland/Metro East and its program, The House That Beer Built, a partnership between Habitat for Humanity Portland/Metro East and local craft breweries and beer-related businesses. The second beneficiary is New Avenues for Youth, an organization dedicated to the prevention & intervention of youth homelessness.

But prior to the taps pouring its first beers of the festival at Noon on July 26th, OBF will host its annual Oregon Brewers Brunch followed by the Oregon Brewers Parade. The brunch is sold out but the parade is free to attend and will begin at 11:30am leaving from the Kimpton RiverPlace Hotel at 1510 SW Harbor Way. From there it will travel north to the OBF Opening Ceremonies at Tom McCall Waterfront Park. Brian and Mike McMenamin will be the 2018 Grand Marshals and will be accompanied by a police motorcade escort, tunes from the BrassRoots Movement Marching Band, and lots of brewers and OBF fans. The parade is free and open to all ages, just make sure to get your wristband if you’re of drinking age for quicker entry into the festival grounds. Then at Noon the opening ceremonies will begin and the first official keg will be tapped around 12:15pm.

From within the US, there are ten states that are represented. Oregon makes up the largest with 53 breweries followed by Washington with 8, Colorado and California with 3, Montana with 2 and Hawaii, Michigan, Missouri, Ohio, and Wyoming with 1 brewery each.

When it comes to the beers pouring the average ABV is 6.1%. There will be 23 beer styles pouring at the fest. IPAs reign over with 23 choices. The lowest ABV is 2.8% from Zoiglhaus with its Elderberry Berliner Weisse while the highest ABV is 12% from Heretic with its Goo Imperial Milk Stout.

To prepare for this year’s OBF, we have compiled a list of all 80 breweries and beers. When it comes to the OBF Program, this year there will not be a printed one. Organizers decided to reduce expenditures while going green. In doing so there is a new OBF App that offers full beer descriptions (search by style, take notes, find on the map). You can also chat with friends, post to the wall; check out the music lineup, and more. The OBF App can be downloaded at https://download.socio.events/event/MjAwMQ.

If you are not a fan of using Apps, the festival is also providing a Google Doc with all the beer descriptions and stats, which can be downloaded for sorting and printing here: https://tinyurl.com/y7obn53a.

Another option is the OBF will be handing out a one-page printed list of beers by trailer and by brewery, with a map of the venue, free for everyone at the event.

Here’s a complete list of all 80 breweries and the beer each will be pouring. 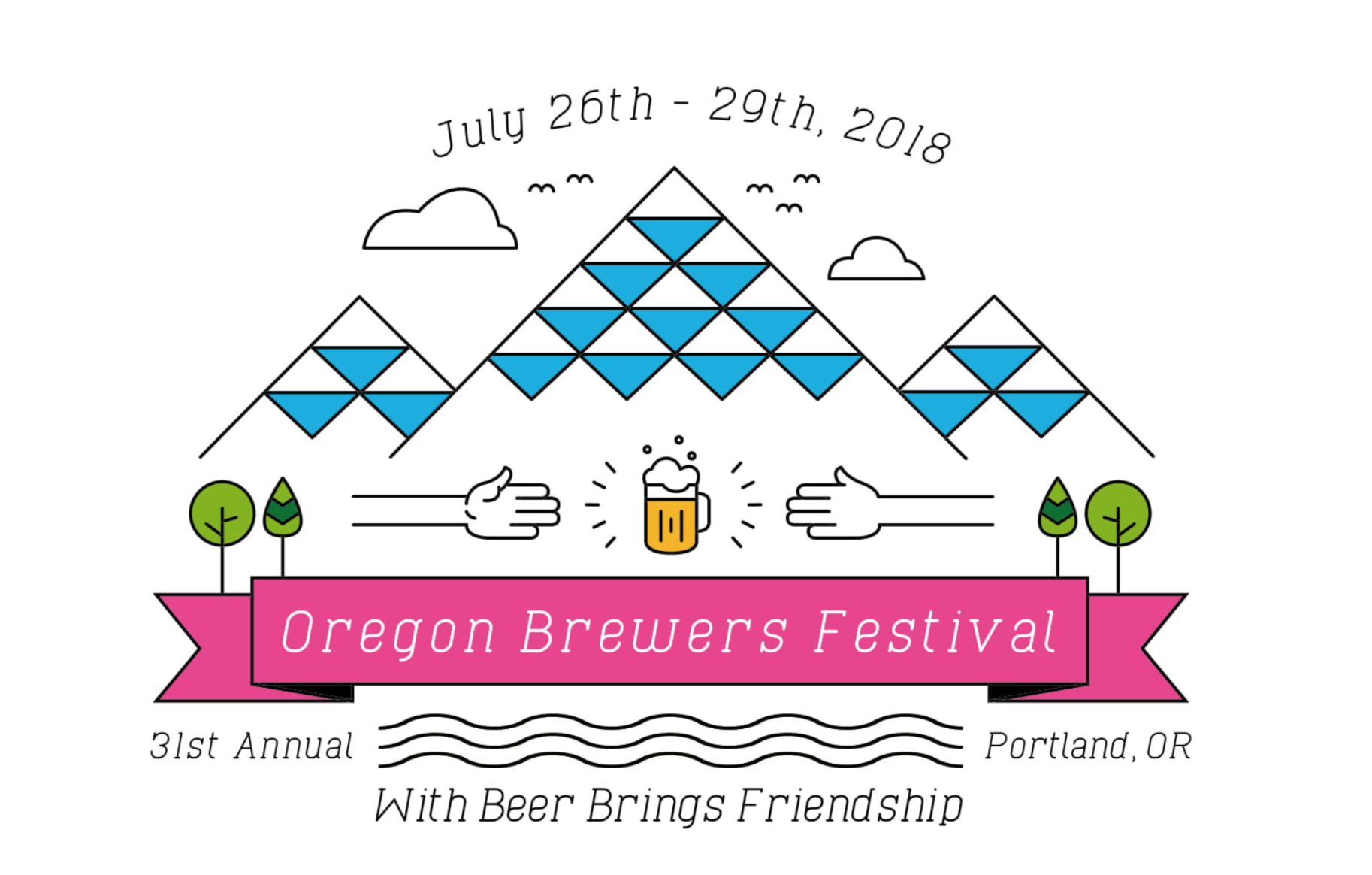 In addition to the amazing beers pouring, the 2018 OBF will also feature craft cider and wine for the first time. Cider Riot! will pour its Everyday Passionfruit Cider and Reverend Nat’s Hard Cider will pour its Viva La Pineapple Cider. When it comes to the wine offerings Eola Hills will pour 2016 Classic Pinot Gris and 2015 Classic Pinot Noir white wine and Serra Vineyard will pour a 2016 Rosa Maria Rosé and 2014 Cabernet Sauvignon Reserve. Both craft cider and wine will be filled in the OBF mug.

Entry into the Oregon Brewers Festival is free. However to consume beer one must purchase a 2018 souvenir plastic mug that costs $7.00. Beer, cider and wine are purchased with wooden tokens that cost $1.00 each. It costs four tokens for a full mug of beer or cider or one token for a taste; it costs five tokens for a five-ounce pour of wine; no tasters available for wine. The purchase of mugs and tokens is made on-site at the Mug/Tokens tent just inside the Oak Street entrance. Mugs or glasses from past festivals will not be filled; however, tokens from past festivals may be reused. The mug/token sales booth is CASH ONLY and does not accept credit cards or checks. The festival does provide eight ATM machines on premise.

The Crater Lake Soda Garden presents complimentary handcrafted soda for minors and designated drivers. Minors are welcome all hours when accompanied by a parent. Animals are not allowed.

In addition to all of this fun there is also live music during the festival’s four-day run. Here’s the music schedule. 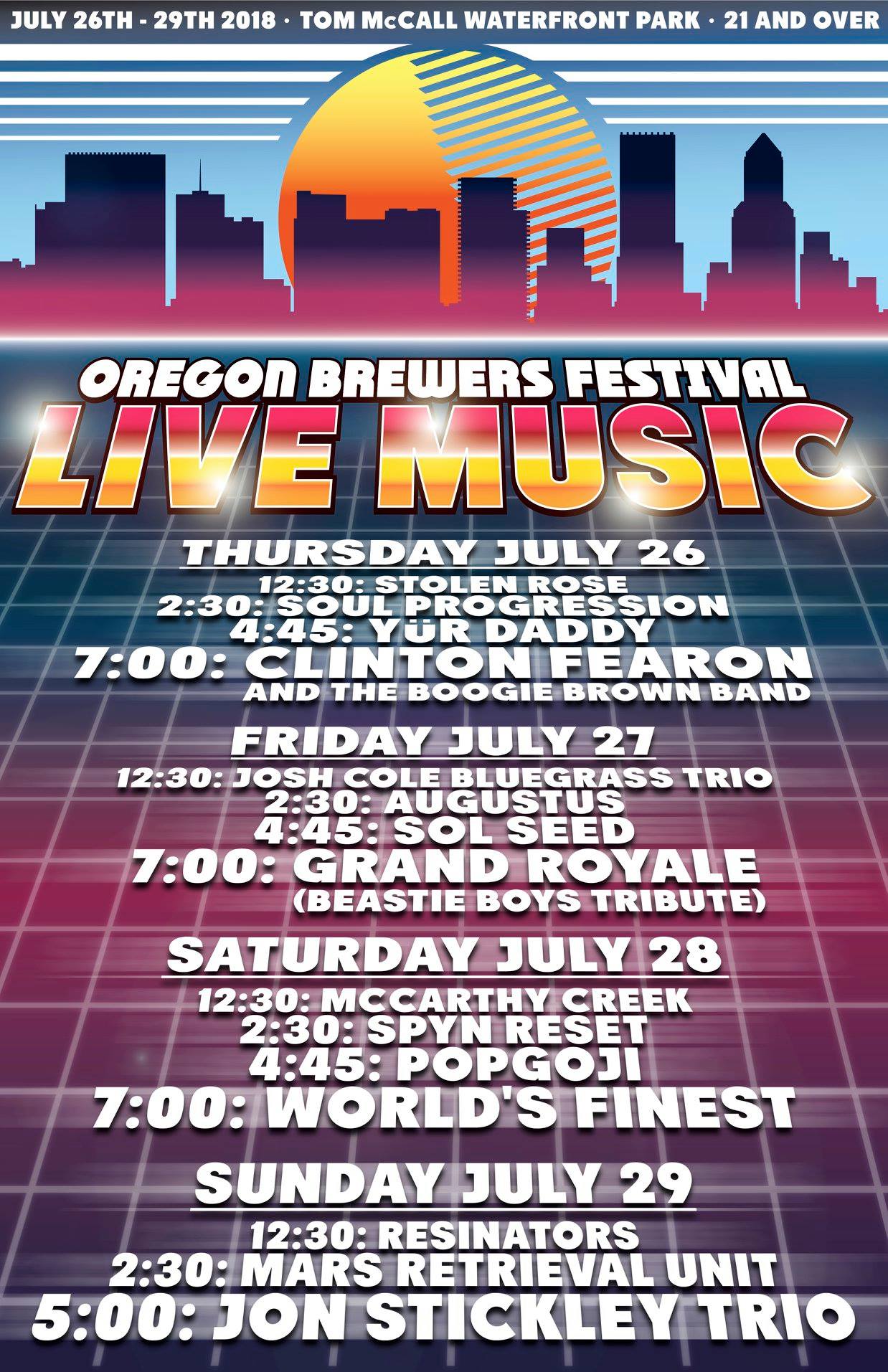 Arriving to and departing from the Oregon Brewers Festival is easy with nearby access to TriMet MAX and buses. Plus the Portland Bureau of Transportation will offer its Safe Ride Home program that will be providing discounted vouchers for $20 toward taxi rides; and $5 for Lyft and Uber rides throughout the festival weekend. Vouchers will be available on-site to everyone. Bicyclists can take advantage of the onsite Hopworks Bike Corral, where volunteers will watch over bikes for free.

When entering the 2018 OBF there are four entrances into Tom McCall Waterfront Park. The four entrances are located at SW Oak Street, SW Pine St, under the Morrison St Bridge and along the sea wall at Pine.