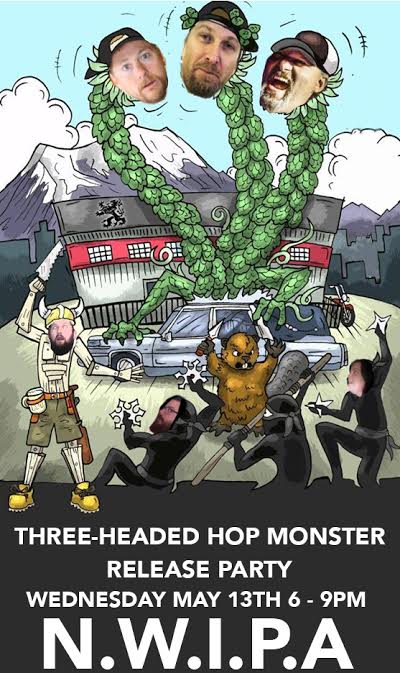 The Pacific Northwest is well known for its bold use and appreciation of hops to produce some of the worlds best IPAs. Three breweries that are well known and respected for brewing some of the most sought after hoppy beers recently joined forces on a new collaboration, The Three Headed Hop Monster.

Last month when Wyoming based Melvin Brewing was driving to Portland for the 2015 Craft Brewers Conference, the brew team made a stop over in Eastern Oregon at Barley Brown’s Brew Pub to brew a beer for currently in progress Seattle Beer Week. But why stop at only two breweries when you have the brewers from Boneyard Beer not that far away. So the three breweries worked up a recipe to brew an Imperial IPA aptly named The Three Headed Hop Monster.

The official release for The Three Headed Hop Monster will take place on Tuesday, May 12th at Brouwer’s Cafe during Seattle Beer Week. For those of us that will not be in Seattle fear not as a few kegs made its way to Portland. On Wednesday, May 13th from 6:00 to 9:00pm N.W.I.P.A. along with The BeerMongers will be hosting a dual release of this epic 9.5% Imperial IPA.